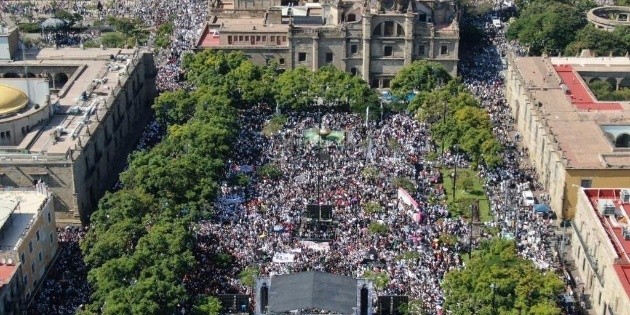 
As “persona non grata” at the University of Guadalajara, he was declared the governor of Jalisco by the student community this Wednesday.

The foregoing occurred during the protest carried out this day to demand a fair budget for the House of Studies, given the risk that 60,500 spaces are running in new projected campuses, as declared by the rector of the UdeG, Ricardo Villanueva.

The statement was made after the intervention of the president-elect of the University Student Federation (FEU), Zoe García, who at the end of her speech urged the crowd: “Raise your hand those who consider that the governor of Jalisco is a persona non grata in the UdeG”.

It was then that the attendees raised their hands to applause and ovations, thus confirming that the president is not well received by the community.

The rector of the house of studies, Ricardo Villanueva, confirmed the fact, as he said, before the actions that he has taken against the University, the students have responded in a show of civility.

“I tell you loud and clear, you abandoned us and we will not forget it. If the FEU declares him unpleasant, then this governor will be unpleasant, because the students here do rule“, expressed Villanueva Lomelí during his speech on the esplanade of Plaza Tapatía.

The foregoing because when Jalisco and its governor needed the student community of the UdeG, for example, “to raise their voices to defend a better budget for Jalisco, and to defend the autonomy of the State, they were there supporting themselves, however,” now that the University and the university students need the governor, he abandoned them due to the allocation of an insufficient budget”.

Previous Mi Banda el Mexicano composed a song for Memo Ochoa – Movie news
Next The decision of King Carlos III that can change the Christmas of princes George, Charlotte and Louis