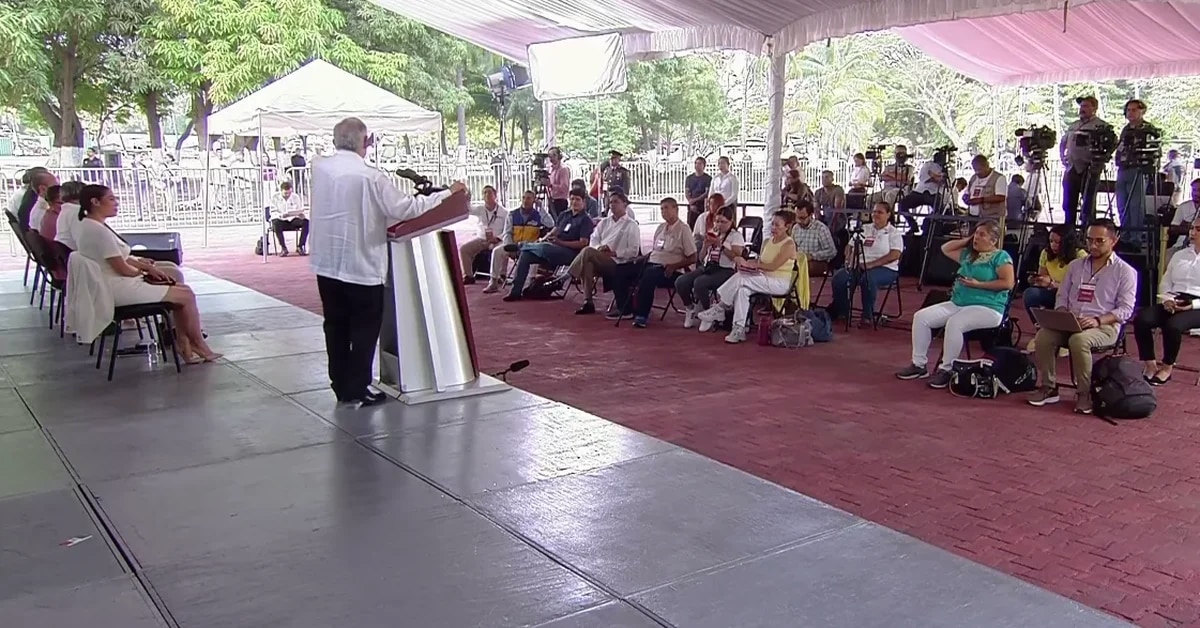 From the Pacific Alliance to what could be AMLO’s last march, the morning summary

Follow and review the minute by minute of the morning press conference of the President of Mexico, Andrés Manuel López Obrador. This November 23, the most relevant issues that occurred in Manzanillo, Colimawere referring to security report of the entity, of which the high rates of criminal incidence and the “excuse” of the Secretary of the Navy stood out.

In addition, the strategy for the control of chemical precursors of cofepristhe electoral reform and changes to secondary law, the first year of Indira Vizcaino as governor, the suspension of the Pacific allianceas well as the visit of the south american presidents and finally, the march of AMLO.

López Obrador assured that he had the support of the people for the sake of “celebration” which will take place in the capital of the country next sunday november 27but he limited himself to saying that attendance is voluntary when he was asked about the estimated capacity.

In addition, he maintained that he does not have subsequent marches in mind, which is why this “It may be the last, although I can’t say it categorically because we don’t know what the future holds”.

After suspending the session of the Pacific Alliance, although not the visits of three of the four South American leaders, López Obrador reported that this day will receive Gabriel BoricPresident of Chili.

He added that he will arrive tomorrow William Lassoof Ecuadorand on Friday Gustavo Petroof Colombia. On absence of Gustavo Petro, from Perucommented: “I spoke by phone with the president of Peru to give him our full support.”

AMLO launched against the Peruvian Congress after denying Pedro Castillo to travel to Mexico: “Rude and anti-diplomatic”

President López Obrador spoke with the president of Peru to express his support and solidarity, as he assured, “they have not let him govern”

President Andrés Manuel López Obrador (AMLO) I declare that the summit of the Pacific Alliance was suspended because it is “very rude and anti-diplomatic” that they did not allow the president of Peru, Pedro Castillo, to travel to Mexico.

“We do not want to leave unfinished works inheritance, because we are applying ourselves to work seven days, 24 hours a day,” AMLO said about the construction of various projects in the Colima entity.

First year of government and threats to Indira Vizcaíno

This Wednesday Indira Vizcaino Silva He will provide his first government report after serving one year in office. On this, the head of the federal Executive said:

“We are very happy with Indira’s work and I believe that the people of Colima support their government (…) The previous government, and it can be proven, requested federal contributions in advance and they left without money, the workers were not paid and it was resolved”.

In addition, he reported that the president, on safety matterreceived threats: “The governor of Colima was threatened and resisted. Here she is, protected by us and by the people. She did not hide, she is a woman with a head, heart and character. We will continue to support and help her in everything.

The “Cow” entered the Altiplano; she spread the death of Mencho and orders to kill Indira Vizcaíno

The battle for Colima and Villa de Álvarez intensified after a fight in the prison where nine inmates died, as a sign of the fracture in the CJNG

His collaborators managed to free him in December 2019 (Photo: SS-CDMX / Sedena)

Jose Bernabe Brizuela Meraz, the Cowenemy of Jalisco New Generation Cartel (CJNG), entered the penalty of Plateauin the State of Mexico, after his recapture in the capital of the country, since he is considered a relevant capo as leader of the Mezcales I the Independiente de Colima Cartel.

AMLO assured that with the secondary law changessufficient legal tools would be created to make important changes in matters electoral before him virtual rejection of the reform proposal at the constitutional level.

“The legal framework is sufficient, the reform was better because he proposed or proposes that the councilors are not elected by the parties, but by the people so that this body is not kidnapped by vested interests. It was also possible to reduce the financing of the parties with the constitutional reform and other things, it is that instead of having 500 contested there would only be 300.

“The people do want reform.”

Resurrected Goes through Mexico; PRD assured that they will reject the Electoral Reform

The march in defense of the National Electoral Institute (INE) has been considered by the opposition bloc and the people who went out to march like a success that has raised their spirits despite the fact that the federal government dismissed the figures mentioned by them (since they affirmed exceed 100 thousand attendees).

Using a metaphor, the president referred to the role of the State over the most vulnerable population and compared it to the care of an owner for his pet.

AMLO spoke about the accusations of which he is the protagonist as “paternalist, populist or communist” after implementing social welfare measures.

“People are very happy, very happy. As long as the people are there, there is a possibility of giving continuity to the transformation process.

“You guys They believe that people are going to vote for parties that do not want pensions for the elderly”, assured López Obrador and recalled when in his term, the former president fox opposed this initiative.

Welfare Pension: how to collect the 3,850 pesos of a deceased relative

The institution is obligated to remove the beneficiary from the register as soon as he dies; however, the institution offers financial support to their relatives

When a beneficiary dies, it is necessary for the relatives to report it to the institution (Photo: Pixabay)

The financial support of the welfare pension is granted by the federal government and is given to the adults over 65 yearswith the purpose that they can cover basic needs such as: food, clothing and payments for essential services.

Due to changes to the secondary law

“And I repeat, the electoral thing is not. That will be dealt with by Congress. I am about to send the reform to the electoral law”.

López Obrador “recognized” that they will attend the 4T march carried

López Obrador faced the accusations of his opponents regarding the 27N march. (REUTERS/Quetzalli Nicte-Ha)

The traditional morning conference of President Andrés Manuel Lopez Obrador (AMLO) was again an invitation space for the March of the next November 27 (27N) in support, according to him, of the self-styled Fourth Transformation (4T).