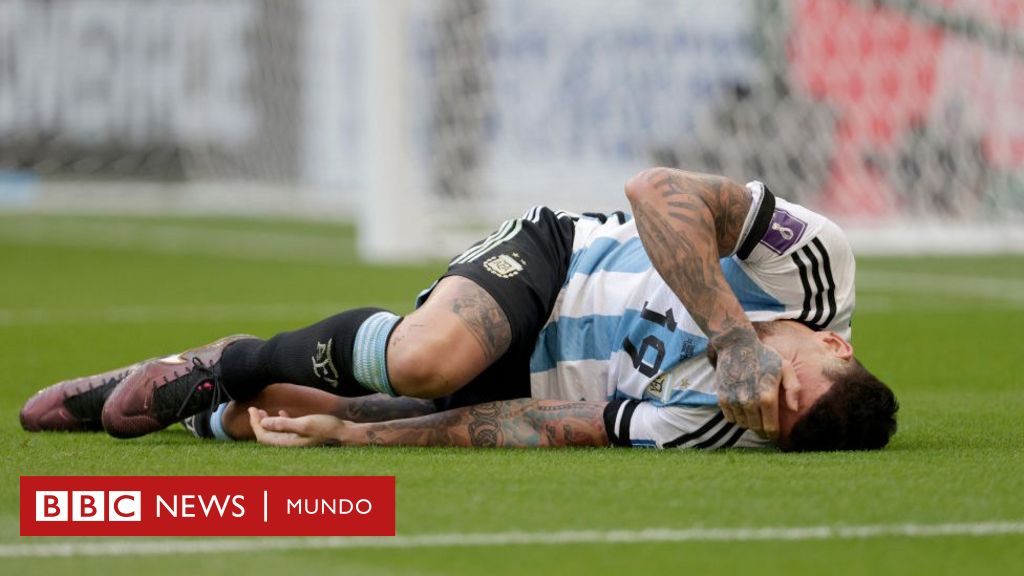 It is very difficult to find explanations for a defeat.

And especially in the middle of a storm.

But at this moment, that is precisely what the Argentine team is doing, facing their next match on November 26 against Mexico: looking for the reasons for their defeat against Saudi Arabia 2-1 in the first match of group C of the World Cup. of Qatar 2022.

The first who came out to try to explain what happened in the Lusail stadium on Tuesday was Lionel Messi, the captain.

“It’s been a long time since we’ve been through a situation like this, so we have to be more united than ever, there are 2 games left, we have to prepare what’s coming and think about ourselves,” said the PSG star.

And he added: “I tell people to trust, that this group is not going to let them down“.

But beyond the captain’s words, the truth is that Saudi Arabia’s victory is perhaps one of the biggest surprises in a World Cup, as big as when South Korea beat Italy in England 66 or the one Algeria gave to West Germany in Spain 82.

With this defeat, Argentina is forced to beat Mexico and Poland in the next matches to be able to go first in the group, which was one of their objectives.

At BBC Mundo we review what could be the reasons for that surprise, which perhaps can be summed up in the words of the Saudi coach Hervé Renard: “The stars aligned.”

If something was clear from this match, played at the Lusail stadium, it is that the approach of the French coach Renard was essential for the victory achieved on Tuesday.

Renard’s strategy was based on not waiting for the albiceleste, but putting pressure on them in the midfield and advancing the defense, which caused Argentina to fall offside multiple times.

In this match they charged him ten out of place, nine of them in the first half.

Just to give us an idea, in the entire Russia 2018 tournament Argentina was charged six.

This was accepted by both Messi and the Argentine coach, Lionel Scaloni.

“We knew that it was a team that if you let them play, they would play well, that they had good players and that they pushed the line a lot, that’s why we had many situations of canceled goals,” Messi explained at the end of the match.

“Perhaps we accelerated a little and we didn’t find the right moment to avoid falling into the trap because they shoot the line well. But we knew they could do that. With so much space, you see it easy and you end up getting offside,” he added. .

This meant that Argentina could not find clarity in two of the most key players in the operation of Lionel Scaloni: the central midfielders Rodrigo de Paul and Leandro Paredes, who lost a large part of the individual duels and had a hard time connecting in an ideal way with the front end: Di María, Messi, Gómez and Martinez.

“We knew how Arabia played. We prepared the game knowing that they came out with an advanced defense. The offsides were millimeter,” Scaloni said at the end of the match.

2. The effectiveness of the rival

“It was five minutes in which the game changed us,” Scaloni declared.

Actually there were six: between minute 48 and 54, Saudi Arabia sealed the game with two goals in the only two chances they had.

the goals of Saleh Alsheiri and Salem Aldawsari they were categorical. And Argentina could not respond properly.

“It is true that Arabia kicked on goal twice and both were goals. And then it did not generate more chances. But the divided ones were won by Arabia, the physical and tactical presence was won by Arabia,” said Argentine journalist Aníbal Greco.

It is true that Saudi Arabia deserved the victory, especially because of what happened in the second half, where they not only scored two goals, but also managed to control all of Argentina’s potential.

However, Argentina was in front on the scoreboard throughout the first half.

In fact, four minutes into the match, Lionel Messi had the opportunity to open the scoring, but goalkeeper Al Owais reacted appropriately.

Then came the penalty converted by the PSG star.

But then, the constant fall in offside occurred, which was something that undermined the confidence of the team on the pitch.

However, in that first half the dynamics and physical display (seen in other games) of the Argentines was lacking to achieve at least one other goal that would allow them to leave with a more comfortable result at halftime.

Now it remains to be seen how the albiceleste react, if they qualify for the round of 16 and above all cling to a memory: in 1990, Argentina lost their first game against Cameroon, but managed to reach the final.

Previous This is how Mexico is doing after drawing their first World Cup game
Next Anastasia Kvitko, the Russian model fills autumn with heat