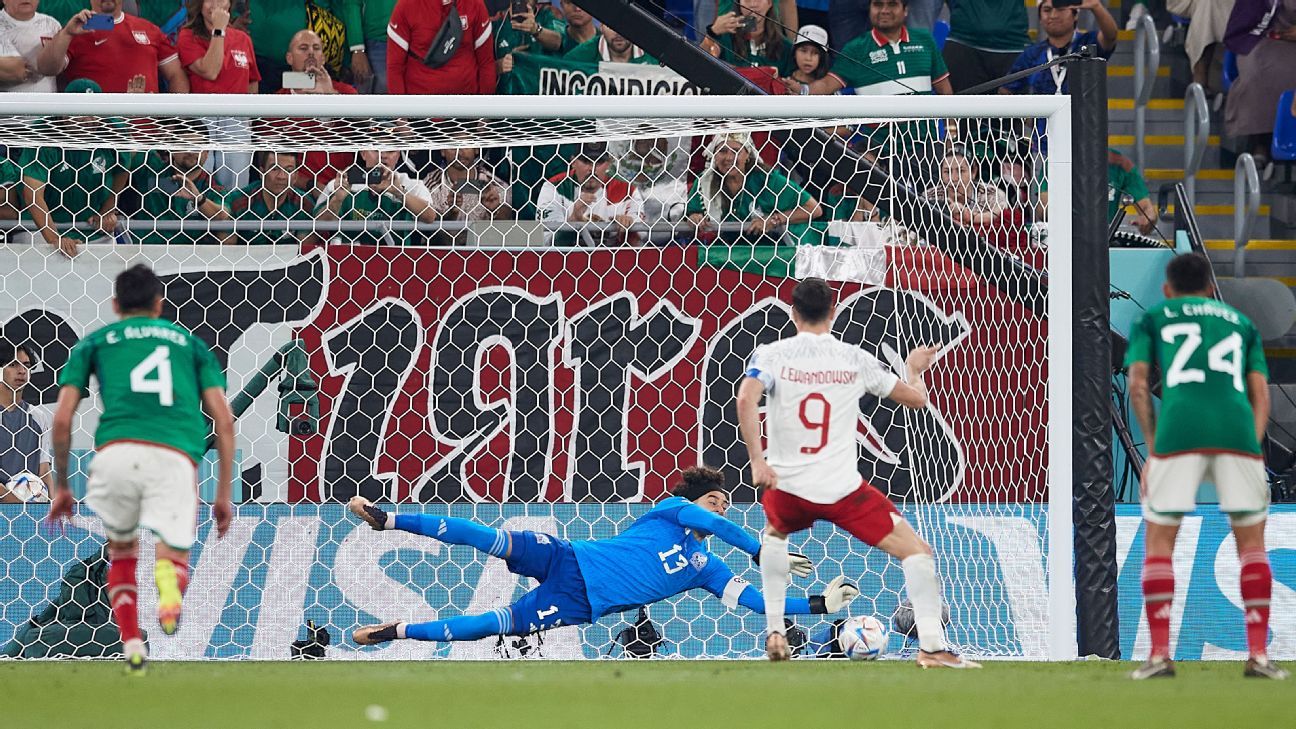 The Mexican goalkeeper won the game against Robert Lewandowski and saved a penalty for the Tricolor in World Cups, after 92 years

Guillermo Ochoa was once again a figure in a World Cup match, now it was in Qatar 2022 and after saving the penalty to Robert Lewandowski, the star of Poland and Barcelona.

The goalkeeper of the Mexican team entered the history of Mexican soccer once again, with the first penalty saved for Mexico in the World Cup since Uruguay 1930when Óscar Bonfiglio saved a maximum penalty, according to information from ESPN’s Stats&Info.

The goalkeeper who attends his fifth World Cup, third as a starter, prevented Robert Lewandowski opened the scoring from eleven steps, in what became the first penalty saved by a Mexican goalkeeper in 92 years, since the first World Cup.

The shortcut of Guillermo Ochoa appeared 58 minutes into the game against Polandwhich was the first of Mexico in Qatar 2022, after Chris Beath sanctioned a penalty in favor of the Europeans for lack of Héctor Moreno to Robert Lewandowski, play that was reviewed in the VAR before marking the free-kick inside the area.

Robert Lewandowskicaptain and star of Poland, took the ball and put it in the penalty spot. He walked back to outline and with his right leg he took a shot to the left side of Guillermo Ochoawho launched himself into the indicated place to prevent the Barcelona attacker from opening the scoring in the debut of Mexico in the World Cup.

The shortcut of Guillermo Ochoa went down in history as the second to be saved by Mexico in the history of World Cupssince Uruguay 1930, the first World Cup that was held, had not happened, a competition in which Oscar Bonfiglio stopped a shot from eleven steps.

Oscar Bonfiglio went down in the history of the World Cups by becoming the first goalkeeper to save a penalty, which occurred in the duel against Argentina in the group stage of Uruguay 1930, the same in which the Albiceleste won by score from 6-3.

From Oscar Bonfiglio to Guillermo Ochoa 92 years passed. However, so far, they are the only two Mexicans who have managed to save penalties in a World Cup, after five maximum penalties against in that period without a save by a Mexican goalkeeper.

The video arbitration was present in the match of the Mexican National Team against Poland for Date 1 of the Group Phase of the Qatar 2022 World Cup by notifying the central referee of a foul inside the area by Héctor Moreno on Robert Lewandowski.

THIS IS HOW THE VAR APPEARED

The 54th minute was running when Lewandowski entered the Aztec area and struggled with Moreno, who won the position from the Barcelona striker and the play did not prosper. Robert fell to the ground and claimed a foul from Chris Beath, referee of the match, but the whistler let the game continue.

Moments later, El Tri had a free kick in favor and the VAR called Beath to review the play between Moreno and ‘Lewa’ on the monitor. After seeing the action several times, Chris decided to score a penalty in favor of Poland after he noticed that the Rayados center-back grabbed the former Bayern Munich player.

Beath showed Moreno the yellow card and Lewandowski took the ball to collect the maximum penalty. The Aztec fans present at Estadio 974 were silent at the possibility of Poland taking the lead in the marking, but they exploded with emotion when Guillermo Ochoa saved Robert’s shot.

Previous Users claim that Nintendo has returned the money for Pokémon Scarlet and Purple
Next In CDMX, motorcyclists shoot against traffic restriction on controlled access roads