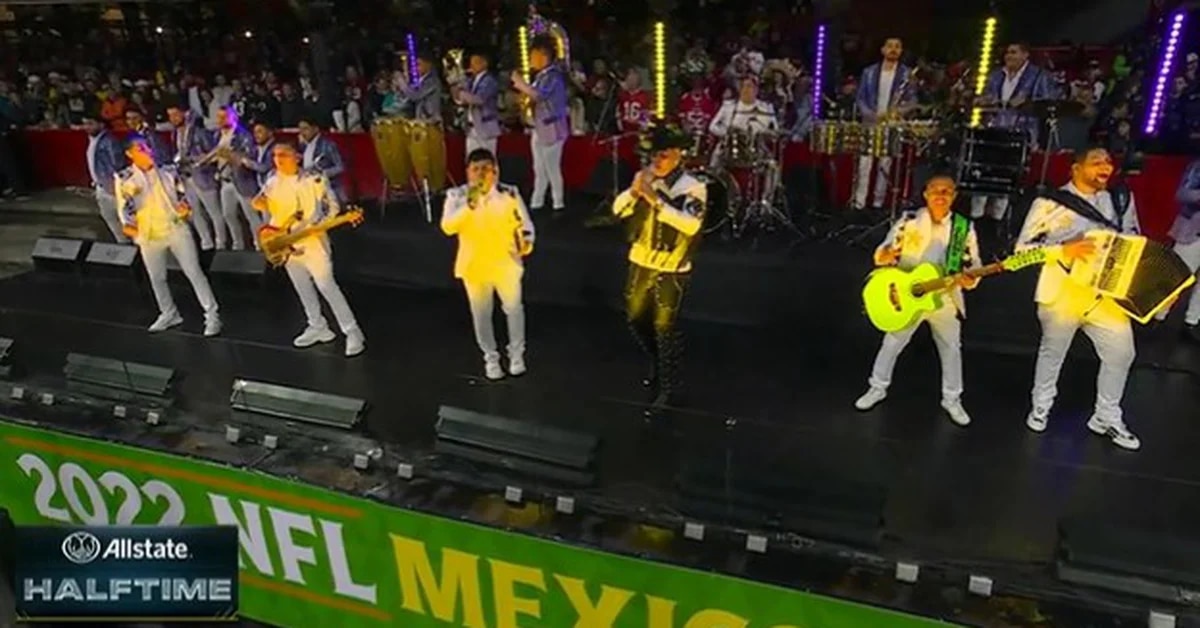 Grupo Firme was booed at the NFL game at the Azteca: “They feel like gringos”

Grupo Firme performed at halftime of the match between the 49ers Vs Cardinals at the Azteca Stadium in Mexico City (Photo: Screenshot)

Just as it had already been anticipated, on the night of this Monday, November 21, a firm group as a musical act at halftime of the Monday Night Footballofficial event of the NFL schedule that took place in Mexico City, where they faced Arizona Cardinals vs. San Francisco 49ersteams that had not competed in the country since 2005.

The opinions of Internet users varied, because while some celebrated, others complained about what happened at the Azteca Stadium

At halftime of the match, when they were 17-10 in favor of San Francisco, the Tijuana band was heard in every corner of the Azteca Stadium, where the performance of Grupo Firme was not welcomed by a large part of the attendees to the sports meeting, who, as expressed on social networks, expressed their rejection of the musical proposal of the Mexican regional.

Since the announcement of the participation of Grupo Firme a few days ago, various users have expressed their disagreement (Photo: Reuters)

Since they were announced as award winners Latin Grammys in the speakers of the colossal enclosure of Santa Úrsula, they let themselves be heard thunderous booing, whistling and disqualifyingmany of them in a classist and discriminatory tone: “They feel gringos”, “P*nches indios”, “Buuuu”.

The band led by the brothers Edward and Johnny Cazwho dressed in white and a bright purple shirt began their performance with the theme Does matters amid boos, to continue with the great success get over mewhich yes it was chanted by a large part of those attending the stadium It has a capacity of almost 90,000 people.

During his interpretation of the hit and the subsequent classic song of the norteño genre The king of a thousand crownsGrupo Firme was not well received by the fans, who reacted negatively every time they were focused on the huge screens of the capital compound.

Likewise, some attendees of the sporting event preferred to be absent during the Grupo Firme performance, probably to rest, have a drink or go to the bathroom, so as not to witness the Show of the band considered as the great “phenomenon” of the Mexican regional today.

It was on Tuesday, November 15, when the NFL announced through its Instagram profile that the regional band would be in charge of entertaining the football match international. “We’re taking over halftime! See you this Monday the 21st at 8:15 pm on the dot through ESPN and ESPN Deportes,” the group’s publication reads.

Eduin Caz announced the sweet expectation of his third child with Daisy Anahy: “The best is already happening”

The presence of the internationally known group divided opinions on social mediaWell, while there were those who applauded the band’s presence at the sporting event, many others launched into criticism.

“Where have we come to!!! Group of drunkards in the middle of the stage”, “very deserved Firm that Mexican pride”, “whoever it hurts, Grupo Firme will win the raffle”, “they already spoiled halftime”, “hopefully one day they will be in the Super Bowl” , “Those of us who love the American don’t like the band”were some of the reactions of Internet users.

Despite the criticism that the group originally from Tijuana has received, it is known that in recent times it has become one of the most famous regional Mexican music internationally. just last september got their star on the Las Vegas Walk of Stars, being one of the youngest groups to do so, since they have eight years of career.

Another of the great achievements of the interpreters of in your life bitch It was his presentation this year at one of the most important music festivals internationally, Coachella. In addition to this, Grupo Firme has been one of the only groups that has achieved appear in various cities in the United States achieving sold out in most of his concerts.

The best memes left by the news of Grupo Firme at halftime in the NFL
NFL in Mexico: when and which team will play at the Azteca Stadium this 2022
The new business of Eduin Caz, from Grupo Firme, which seeks to captivate his followers