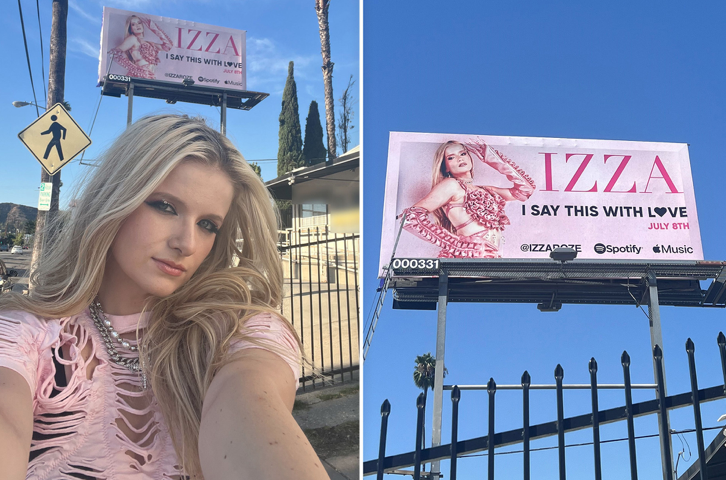 Singer puts up a billboard outside her ex’s house

Advertising and marketing is a tool that people can use when they want to. This is the case demonstrated by the 25-year-old singer-songwriter Izza, who went viral after posting his face on various billboards throughout Los Angeles, United States, including one in the strategic location, in front of his ex’s house, assuring that it is part of a revenge for being unfaithful to him.

The importance of marketing can be seen reflected in advertising spending in the global market, where a study conducted by eMarketer highlights that this industry generates millions of dollars, and spends around 516 billion dollars a year in advertising in the media.

Data from Zenith show that North America is the main focus of investment in the sector, where only the United States It is the largest advertising market in the world, with spending that exceeded 240 billion dollars.

He puts a billboard outside his ex’s house

The history of Izza has gone viral, after undertaking a revenge against her ex-boyfriend. The 25-year-old woman placed her face on various billboards.

“My ex cheated on me so I put up a billboard with my face in front of his apartment so he and his new girl can see me every day”she wrote in a TikTok video that shows her posing under a billboard for her latest album.

The video quickly went viral. registering 4.3 million views and thousands of comments from people who encouraged the largest retaliation.

“I think when you get your heart broken, you just want to get back and show that you’re doing so much better,” Izza said.

Likewise, it highlights that with that action where it uses advertising as a tool, she wants her ex-boyfriend to see her face, regret it, and see how well she’s doing.

The billboards are in prominent locations such as Tinseltown, where he is promoting her “I Say This With Love” EP and has a huge photo of her placed on purpose.

“I hope that [mi ex] see the billboard in the morning when you open the blinds, that was the goal. I was going to be front and center,” she admitted.

In that sense, some TikTok commenters have accused Izza of being petty and wasting her energy.

Likewise, Izza’s comments are full of viewers calling her iconic queen and rooting for her. As well as the main brands including Tinder and the European Wax Center even applauded his savagery in such advertising.

As an example, Tinder quipped: “I think this is what Taylor was referring to. [Swift] when he said ‘karma is a relaxing thought, aren’t you envious that it isn’t for you?’”.

It is not the first time that a story like this is vitalized on social networks, as there is the case of a woman who spent a million just to take revenge on her unfaithful husband in a full ad in the local newspaper.

And this is how advertising can be the best communication tool for people around the world, thanks to the fact that it can reach a large audience, even crossing borders.

“Get hold of Uber!”; Competition revived in networks with the arrival of Didi in Puerto Vallarta

Previous “El Marro” continued to operate the Santa Rosa de Lima Cartel from prison, according to Sedena
Next Open call for a degree in Integral Medicine and Community Health in the Sierra Tarahumara – El Heraldo de Chihuahua