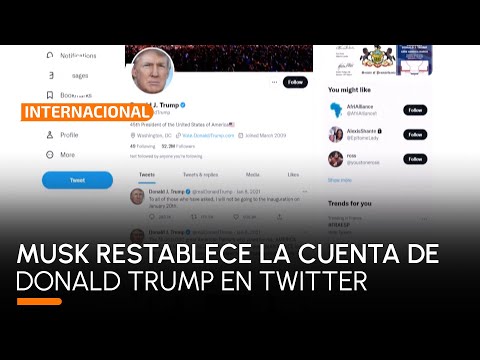 Elon Muskthe new head of Twitter, restored this Saturday the account of former United States President Donald Trump, banned from the social network after the assault on the Washington Capitol in January 2021.

“The people have spoken,” wrote the tycoon Elon Musk in the social network of which he owns, after the results of a survey launched among his followers.

More than fifteen million responded and 51.8% voted in favor of the “yes” to the return of the politician republican to the platform.

A poll, key point to receive Trump again on Twitter

Of the millions of people who voted in the survey that Elon Musk himself published on his Twitter account, 51.8% approved the reintegration of Donald Trump into the social network, while 48.2% rejected the measure.

A few minutes after his message, Trump’s account was visible again. The last tweet dates from Jan 8ro of 2021.

Trump does not want to be on Twitter, responded to Musk

In an appearance on video During the Republican Jewish Coalition meeting in Las Vegas, Trump said he welcomed Musk’s poll and that it was his fanbut appeared to reject any return to Twitter, where he had more than 88 million followers.

On whether I would return to Twitterwhere she had more than 88 million followers, said: “I don’t consider it because I don’t see any reason for it.”

Twitter had indefinitely suspended Trump on January 8, 2021 at the “risk of further incitement to violence”, two days after his supporters invaded the United States Capitol.

Musk He had already mentioned in May a possible return of the former Republican president, considering that this sanction constituted “an extremely bad and senseless moral decision.”

While many critics fear that the content is no longer moderated enough on the social network, the billionaire has been waiting to speak on the subject.

The decision may cause a stir in much of American society and the political world, especially now that Trump has once again entered the race for the White House by 2024.

This Saturday, November 19, the president Andres Manuel Lopez Obradorannounced that voted on Twitter in favor of the account of the former US president being restored.

“I already voted for Trump to be able to use Twitter. The Statue of Liberty must not remain an empty symbol.”

Twitter had suspended Trump on January 8, 2021two days after the attack by his sympathizers on the Capitolin Washington, given the “risk of further incitement to violence.”

Previous Will it be possible to deslopezobradorize Mexico’s participation in the World Cup?
Next Why Morgan Freeman wore a glove on his left hand during the opening of the Qatar 2022 World Cup