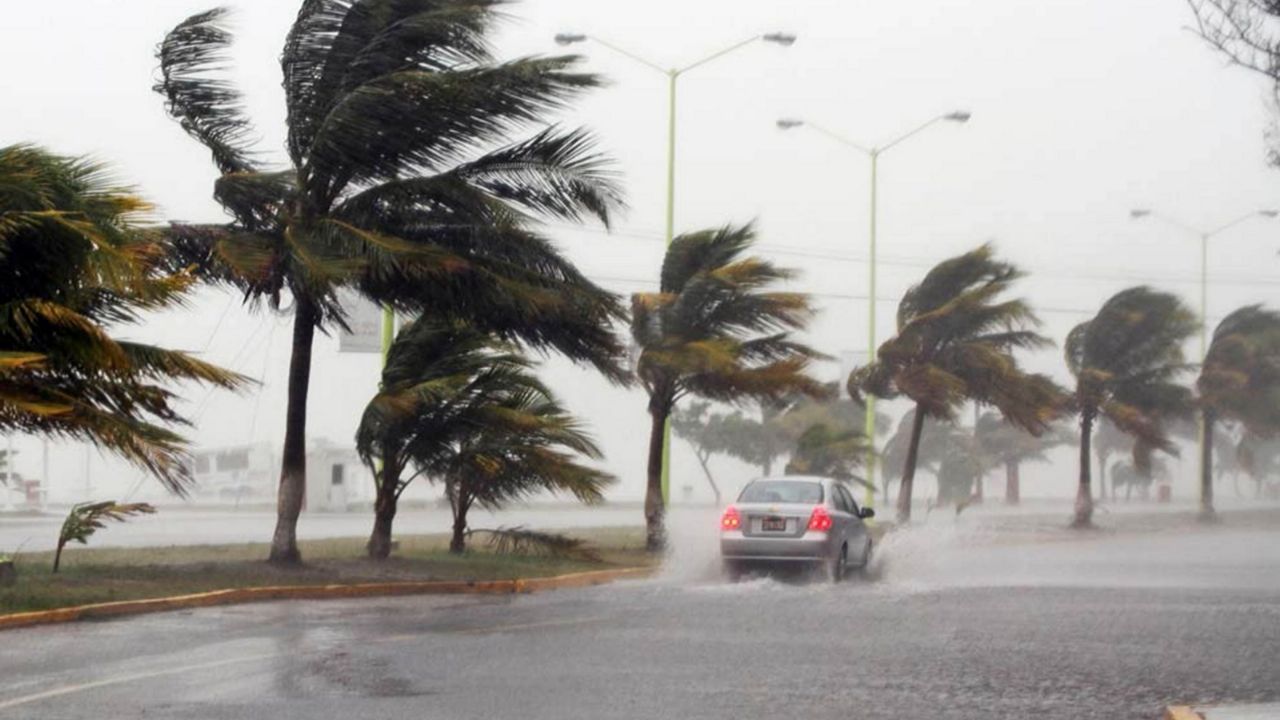 Weather in Yucatan: the cyclone is approaching the Peninsula. When is “Hermine” born?

A low pressure channel over the southern Gulf of Mexico and the southeast of the country in combination with the monsoon trough in the South Pacific, the entry of moisture from the Caribbean Sea and higher atmospheric instability, will cause this Friday, September 23 heavy rains in Campeche and Yucatanand showers in Quintana Roo.

According to the National Water Commission (Conagua), it also monitors tropical depression number 9 over the Caribbean Sea with 90% chance to form a tropical cyclone in 48 hours. It is located about 2,300 km east of the coast of Quintana Roo and moves west-northwest at a speed of 16 and 24 km/h.

Tropical depression number 9, according to Conagua and the specialized Meteorology Yucatan site, if it continues its slow evolution over the Caribbean Sea, it is possible that it will become a tropical storm or even a hurricane and could approach the Yucatan peninsula in the coming days.

Consequently, the United States National Hurricane Center predicted that the tropical wave that advances over the Caribbean and is about 200 km east-northeast of Curacao, due to its development, has a high probability, of 90%, to become “Hermine”, which would be the eighth tropical cyclone of the 2022 season in the Atlantic.

You could see: Weather in Yucatan: Cyclone ”Hermine” would form in the Caribbean. Would it reach the Peninsula?

In addition to the possible cyclone, other systems in the Atlantic that could affect the Peninsula?

The National Meteorological Service through Conagua reported this Friday 23, already in the fall, that monitor three low pressures in the Atlanticall with possibilities of cyclonic development in 48 hours and five days, in particular the one that advances in the Caribbean, which has already become tropical depression number 9.

Depression number 9 is located about 2,300 km east of the coast of Quintana Roo with a displacement to the west-northwest, and according to Sareti Cardós Pacheco, meteorologist at Conagua Yucatán, this tropical wave, called Invest 98, would originate this Friday “Hermine”, the eighth cyclone of the current period.

The future tropical cyclone, Sareti quoted, would tend to move west of Cuba or the Yucatan Channeland when asked if it will affect the Peninsula, he indicated that the meteorological models differ, but he said that if the system were to form, the first cloud bands of the cyclone would reach Quintana Roo on the morning of next Monday the 26th.

On the other two low pressure areas, Conagua explained that the second is west-southwest of the Cape Verde IslandsAfrica, with a 30% probability of developing into a cyclone in five days, and is located 5,655 km east of the coast of Quintana Roo, moving slowly to the northwest.

The last one, associated with a tropical wave is off the west coast of Africa, with a possibility of cyclonic evolution of 60% in 48 hours and in five days. It is located about 7,160 km east-northeast of Quintana Roo and is moving north at 16 km/h.

What is the US National Hurricane Center’s forecast for the possible tropical cyclone?

In its report this Friday, September 23, the US National Hurricane Center, based in Miami, warned that in the southeast of the Caribbean Sea there is a low pressure system east-northeast of Curacao, and they predicted that there is a 90% chance that form a tropical depression while moving west-northwest at 16 to 24 km/h.

“It is likely that this system (from which “Hermine” would be born) affects northwestern Venezuelathe ABC island chain and northeastern Colombia this Friday, with an alert for Jamaica and the Cayman Islands that must closely monitor their progress.

About the another low pressure in the Central Atlanticwith a 30% cyclone possibility, is hundreds of kilometers from the Cape Verde Islands, Africa, and it is possible that during the next few days it will move northwest or north over the center of the tropical Atlantic.

Refering to third broad area of ​​low pressure associated with a tropical wave, the furthest from the American continent, with a 60% cyclonic probability at 48 hours and five days, they forecast that it could evolve into a tropical depression this weekend on its way north, parallel to the west coast of Africa.

When would “Hermine” form, would it impact the Yucatan Peninsula?

Juan Antonio Palma Solís, from Yucatan Meteorology, pointed out that the cyclonic threat represented by the tropical wave already in the Caribbean Sea it is high, as pointed out by the National Hurricane Center and Conagua.

“The possibility is growing that this disturbance becomes a tropical storm or even a hurricane off the coast of Quintana Roo early next week, although there is still no certainty about its future trajectory and its probable impact on land,” he added.

The operational meteorologist recalled that a zone of instability over the Caribbean advancing west and intensifies its clouds and storms, although it has not yet become a tropical cyclone, since it found sharp and divergent winds in upper levels of the troposphere that prevent its adequate cyclonic evolution.

“However, weather forecasts indicate that this system will move west-northwest over the course of this weekend, already over the central Caribbean, where the cutting winds will decrease, a circumstance that will intensify, if it happens, to early next week this possible cyclone tropical would be ‘Hermine,'” he added.

Trajectory of the possible tropical cyclone, would it touch the Peninsula?

“If a high pressure associated with a cold front over the northern West Indies moves rapidly east and weakens, the possible Cyclone ‘Hermine’ would move northwest towards Cuba and Florida, perhaps next Tuesday, September 27, linked by a trough that will accompany another cold front to the north of the Gulf of Mexico”.

But, he mentioned, that if the high pressure north of the Antilles strengthens and expands, the cyclonic system would move to the peninsula of Yucatan, because it would be blocked by the anticyclone, regardless of the intensity with which it reaches the western Caribbean.

“In the end, it will be the behavior of the surrounding atmospheric patterns in our area that will define the ground impact trajectory. next week there would be a clearer pictureNow we have to be aware of the evolution of the system and the forecasts of official institutions and experts,” said Juan Antonio.

What weather would there be in Yucatan this Friday, September 23?

The meteorologists of the Regional Hydrometeorological Center “Mérida” of the Conagua Yucatán forecast for the next 24 hours, partly cloudy to cloudy skies, with probability for intervals of showers with storms. Hot environment during the day and warm at night.

Temperatures for Mérida and the rest of Yucatán

The atmosphere will be hot during the day and warm at night, with an east-northeast wind of 15 to 25 km/h and gusts of 45 km/h over the Yucatan and Campeche coasts.

Specialists from Conagua Yucatan estimate maximum temperatures in Merida from 33 to 35 °C as maximum and from 21 to 23 °C as minimum. For the other municipalities in the interior of the
state, the maximum would be 34 to 36 °C in the south and 20 to 22 °C the minimum for the south.

It may interest you: Procivy calls the population to continue promoting the culture of civil protection

Previous where to buy and what is its official price
Next Victoria Ruffo was in love with him, but her heart cried for another