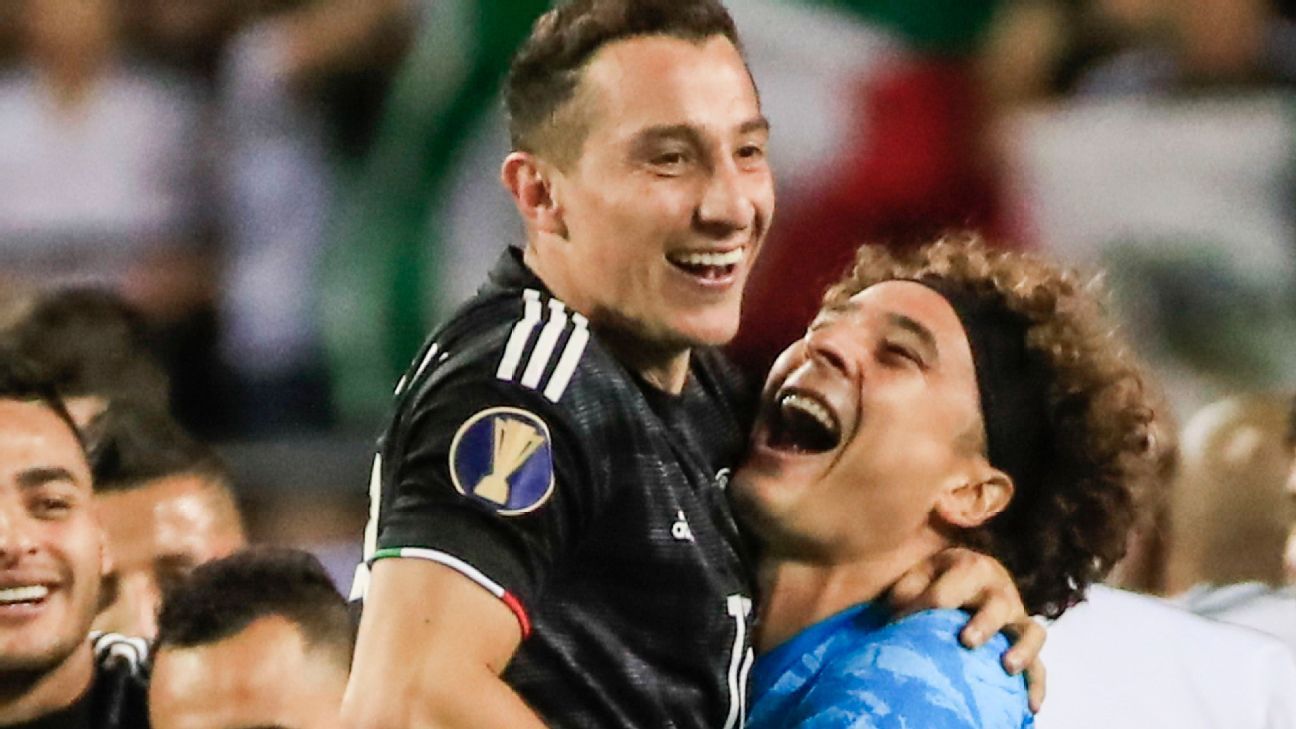 Take it, Argentina! You already lose 4-1 with Mexico

LOS ANGELES — The virginal bride, the ball, will still remain quiet, neat, unscathed in Qatar, and Mexico will already be thrashing Argentina 4-1. Of course, in the marker of insignificance, of the anecdotal, of the folkloric, in the appendices of the annals of FIFA.

4-1. In the 2022 World Cup, Mexico will add four players with five world cups. Argentina will hardly have the first. In addition to Antonio Carbajal Y Rafael Marquez, El Tri will add Guillermo Ochoa and Andrés Guardado. La Albiceleste will present Lionel Messi as the Cid Campeador of its last hope of being world champion.

4-1. A beating, in trivial scenarios, insignificant. Longevity as an act of media survival in football. Today, Guillermo Ochoa with consistency and continuity in America. Today, Andrés Guardado, in the style of José Alfredo Jiménez, drawing youth from his past, and trying to subdue the harpies of osteoarthritis in both knees.

To the list where Carbajal, Márquez, Lothar Matthaeus Y Gianluigi BuffonIn addition to -surely-, Messi, Guardado and Ochoa, the Portuguese Cristiano Ronaldo would be added. The 8 Horsemen of their own soccer apocalypse.

Why this predominance of Mexicans? Chiaroscuro inherent in the idiosyncrasy of his football. Because at the time, Mexican football was not able to engender its successors, to strengthen new generations. And of course, because beyond scandals as public figures, they have been serious in their trade.

Two of them even staged surprising resurrections. Márquez survived his almost funereal ordeal in the MLS, to be a two-time champion with the León, get into two more World Cups (2014 and 2018), and take a little walk through Hellas Verona.

Saved, before Brazil 2014, he was a soul in pain, practically without a team, and after the contest he offered his best version. In a country where mocking death is the daily agenda, it stands to reason that these two would mock their own footballing death.

Antonio Carbajal (June 7, 1929) received the first appointment of the “Five Cups”. Archer of the Club Spainbut with his great career in the León team, he made his world cup debut in Brazil 1950. He was the youngest goalkeeper in that contest: 21 years old.

He returned as a starter to the 1954, 1958 and 1962 World Cups, when Mexico, in Chile, achieved its first victory in a World Cup, 3-1 over Czechoslovakia, ultimately runner-up in the tournament, losing the Final to Brazil led by Garrincha.

In England 1966, he would return to the fray, already 37 years old. He participated in 11 World Cup games and conceded 25 goals. Today, at 93 years old, he is still an eventual reference, giving his opinion on soccer issues.

Beside Hugo Sanchez, Rafa Márquez is the most important Mexican player in Europe. League and Cup champion with Monaco, he was key in winning 11 titles with Barcelona, ​​in various official competitions, and even today, some Catalan sectors place him among the best 22 players in Barça history.

With the Mexican National Team, Rafa Márquez won two Gold Cups and the 1999 Confederations Cup, but in World Cups, he always had to experience the bitterness of not reaching, at least, the utopia of the Fifth Match.

Curiously, his first call-up with El Tri was due to an error in Bora Milutinovićbecause he wanted to summon his companion in the Atlas, Cesar Marquez.

His goodbye to El Tri in the world championships would come in Russia 2018. In the victory over Germany, he replaced Andrés Guardado, and against Brazil, in the quarterfinals, he appeared as captain to impose that record of being the only player in history to act as a leader of a national team.

Marquez and Cuauhtemoc Blanco they are the only Mexican players to have scored three goals in three different World Cups. In addition, he was the scorer of the winning goal (2-1, November 11, 2016) in Columbus, which put an end to the dictatorship imposed by the United States in that place and in World Cup qualifiers.

Player with remarkable time management, good header, and with great precision in deep services, The Kaiser of Michoacan However, he starred in one of the most grotesque scenes of a World Cup, when he attacked Cobi Jones in frustration at being eliminated by the United States in the Quarterfinals of the 2002 South Korea/Japan World Cup.

Andrés Guardado debuts in world cups against Argentina. It was the surprise move he had in store Ricardo LaVolpe to face the albiceleste in Leipzig in the Quarterfinals of Germany 2006. After the game, which the Argentines won with a great goal from maxi rodriguezthe coach José Pékerman acknowledged the bewilderment caused by the great performance of The little Prince.

disagreements with Javier Aguirre, coach of the Tri in South Africa 2010, ended up relegating him from ownership. However, his consistency always kept him in the national team and he participated in Brazil 2014, Russia 2018 and everything indicates that he is one of the immovable for Qatar 2022.

The World Cup in Brazil seemed to escape him. His arrival at Valencia in 2012 would imply a huge pothole in his career. Dissatisfied, the Spanish team loaned him to Bayer Leverkusen, where he was also unable to establish himself. Suddenly, he found himself in limbo, with no rhythm and no equipment, technically speaking. However, Miguel Herrera decided to rescue him. He added him to the troop heading to Brazil and ended up being outstanding for PSV Eindhoven to take him to their ranks, where he remained until 2017 and received one of the most emotional farewells from the fans.

Today, part of Real Betis, has had a solid start to the season, despite ailments in both knees. He has been a constant player with Gerardo Martinoalthough his performance with El Tri has been below expectations.

He himself has said that he wants to go to Qatar not to join the privileged club of the “Five Cups”, but to collaborate in achieving goals never met by El Tri, for example, playing that much vetoed and banned Fifth Game.

Fourth on the list of the “Five Cups” is America’s goalkeeper, Guillermo Ochoa. His fate seemed to change dramatically in 2014. Neymar’s save from a huge header was compared to that of the Englishman. Gordon Banks a O’Rei Pele, in Mexico ’70. They are considered the two best sets in the history of the World Cups.

Ochoa has not been a starter in the previous four World Cups and the big surprise was having been displaced by the veteran Oscar ‘The Rabbit’ Perez at the World Cup in South Africa. But, without a doubt, he is considered one of the best goalkeepers in the history of El Tri.

After the World Cup in Brazil it seemed inevitable that he would emigrate to Europe. It happened, but it ended at Ajaccio. It is said that the one who ruined his transfer to Paris Saint Germain at that time was louis yon. He delayed the release of the pass for the final signing of the contract and came back positive for clenbuterol in the Gold Cup, along with four other Tri players. PSG backed down, and from dreaming of the top, they ended up in the beautiful suburb of Ajaccio.

He is the most punished goalkeeper in the history of El Tri, but with the fewest errors in his account, thanks to the fact that he is a goalkeeper with solid control, spectacular reflexes and instinct, although his great defects have been the exits due to high balls, and his regular footwork. Still, he remains the safest and most reliable goalkeeper in Mexico, and it seems inevitable that he will start for Mexico in Qatar.

See then that, when the World Cup starts next November, Mexico would already be thrashing Argentina 4-1, although, yes, in a score of total insignificance, and with a slip of anecdote and comedy.

Previous He betrayed Silvia Navarro, he suffered the worst and now his heart is full of rage
Next Sheinbaum opens mobility exhibition; they exhibit the first new train of Line 1 of the Metro