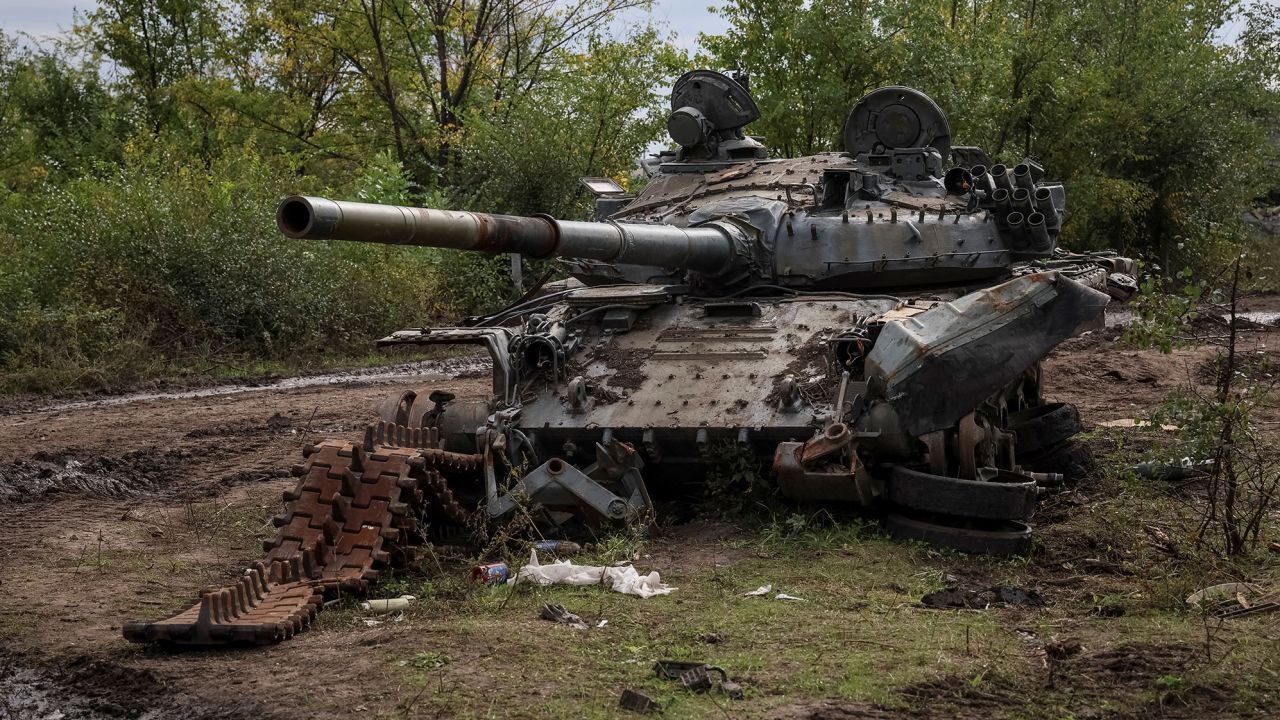 Putin tries to raise the stakes in Ukraine. This means (Analysis)

(CNN) — In a speech as threatening as his declaration of a “special military operation” against Ukraine in February, Russian President Vladimir Putin declared a partial mobilization of Russian citizens to help wage a faltering military campaign.

Seven months later, Putin’s language was, if anything, even darker than in the early hours of February 24. He then warned the West that Russia would immediately respond to those who stand in its way, with consequences that “will be the like of which they have never seen in their entire history.”

In his last speech, he made that threat concrete. “The territorial integrity of our homeland, our independence and our freedom will be secured, I stress again, with all the means at our disposal. And those who try to blackmail us with nuclear weapons must know that the prevailing winds may turn in their direction,” said this Wednesday.

The Russian leader dramatically upped the ante, just as Russia embarks on a rushed process to expand what constitutes that “homeland,” through hastily staged referendums in the occupied territories that aim to absorb parts of Ukraine into Russia itself: Donetsk, Luhansk, much of Kherson and Zaporizhia.

The announcement of those referendums on Tuesday was as sudden as it was synchronized. The idea that they could be organized in a matter of days in areas where hostilities continue is, at first glance, absurd, especially since some officials in those areas had proposed delaying votes on joining Russia until conditions in security. Equally absurd is the notion that Russia’s accession arose spontaneously from the territories themselves.

But that’s not the point. Matthew Schmidt, an associate professor of national security and political science at the University of New Haven, says Putin is using the referendum call to justify the mobilization.

Putin has two audiences in mind. Anatol Lieven, director of the Eurasia Program at the Quincy Institute, says he wants to “persuade the United States and/or the Europeans to get serious about negotiating a compromise agreement to end the war by showing that, Otherwise, Russia will take radically escalatory steps that will not only force the West to escalate accordingly, but will rule out any possible peace for a long time.”

Alexander Baunov of the Carnegie Endowment puts it bluntly. In a series of tweets Before Putin’s speech, he wrote that the message to Ukraine’s allies is as follows: “You chose to fight us in Ukraine, now try to fight us in Russia itself, or, to be precise, in what we call Russia.”

Schmidt says that Putin’s main audience is the home front. He is trying to regain the initiative and harden the morale of the Russian public. He may also be expecting a surge in popularity similar to the broad public support for Russia’s annexation of Crimea in 2014. “The mobilization is not a military decision, but a way of trying to control the narrative about the war that has already taken place.” realize you’re losing,” he told CNN.

“Putin has to say that Greater Russia is under attack. It’s very difficult for him to sell that; he puts his leadership under a lot of pressure,” adds Schmidt.

Baunov believes the goal is to turn a Russian invasion of a neighboring country into a defensive war, a distinction that “would make the conflict more legitimate in the eyes of ordinary Russians, leaving the Kremlin free to make whatever decisions and measures it sees fit.” necessary”.

But mobilization is a big risk, says Schmidt. He takes time – to train, equip, organize – and does nothing to improve Russia’s biggest shortcomings.

Moscow faces the same huge logistical hurdles that have plagued the last six months of war.

Its forces have suffered such losses of military equipment that the Russian Defense Ministry has turned to North Korea for ammunition, according to US officials. Their latest setback in Ukraine’s northeastern Kharkiv region has left some of their elite tank units severely depleted.

The “partial mobilization” announced by Putin also appears to be leaning on parts of the Russian population that would already have experienced significant pressure to enlist in Russia’s faltering war effort.

A billboard promoting military contract service with the image of a soldier and the slogan “Serving Russia is a real job” stands in St. Petersburg on September 20, 2022. Credit: Olga Maltseva/AFP/Getty Images

Defense Minister Sergei Shoigu said there would be some 300,000 reservists available.

“These are not people who have never heard of the military,” Shoigu said. “It’s those who have served, have a military record specialty, have had military experience.”

The mobilization is limited, perhaps in order not to alienate public opinion, perhaps to make room for other movements later on. Shoigu stated: “Those who have served and have a military specialty are almost 25 million.”

But the fact that Russia is drawing on Chechen units, volunteer battalions, militia from Luhansk and Donetsk, and even convicts recruited by the private military contractor Wagner, belies the claim that there is a ready supply of veterans to head to the front lines.

The mobilization “will not provide young trained officers who can lead assault operations against an army that has been fighting for more than 3,000 days,” Schmidt told CNN, referring to Ukraine’s conflict with Russian-backed separatists in the region of Ukraine. Donbas since 2014, nor will it change a culture that has struggled against Ukrainian adaptability.

Putin could not have chosen a more scathing way to raise the stakes in Ukraine than with his direct reference to nuclear weapons, but observers are not convinced that he will or even can follow through on that threat, despite his insistence that he’s not bragging.

In June 2020, he signed a decree updating the Russian nuclear doctrine that requires to be cited in its entirety. “The Russian Federation retains the right to use nuclear weapons in response to the use of nuclear weapons and other types of weapons of mass destruction against it and/or its allies…” But that sentence ends with an unusual statement: “… and also in case of aggression against the Russian Federation with the use of conventional weapons, when the very existence of the State is endangered”.

The Quincy Institute’s Lieven says it’s impossible to say whether Putin would condone the use of tactical nuclear weapons, but “it seems doubtful Russia would use them unless Crimea itself is in danger of falling.”

So far, Lieven told CNN, “Putin’s strategies have overwhelmingly failed, both in terms of military progress on the ground and economic pressure on the West to seek a compromise with Russia.”

However, he says, “Russia retains the means for a serious escalation without nuclear weapons, in particular, the destruction of Ukrainian infrastructure and the assassination of Ukrainian leaders.”

Schmidt also believes there is little risk of Putin resorting to tactical nuclear weapons, “because that would really involve NATO and lose the Russian military, the source of its power.”

A destroyed Russian tank is seen in the city of Izium, recently liberated by the Armed Forces of Ukraine, in Kharkiv region, Ukraine September 20, 2022.
Credit: Gleb Garanich/Reuters

And while Putin was specific in saying that the partial mobilization would be used to defend the newly occupied areas, he did not decide to extend his nuclear threat to the very expanded idea of ​​what Russia might consider its territory in the future.

But the very mention of those nuclear weapons is obviously designed to complicate the enemy’s calculations.

For some observers, the formal absorption of parts of Ukraine into the Russian Federation risks making any negotiated end to the Ukrainian conflict almost impossible, no matter how far away it already seems.

Former Russian President Dmitry Medvedev said Tuesday that once the republics are integrated into the Russian Federation, “not a single future leader of Russia, not a single official will be able to reverse these decisions.”

However, Schmidt points out that Medvedev is a surrogate, not the source of authority, and that both sides have established maximalist positions that could eventually be adapted or exchanged through negotiation. That moment, however, seems further away than ever.

People celebrate the result of Crimea’s referendum on joining Russia at a market in Simferopol, Ukraine, on March 18, 2014. Credit: Hannibal Hanschke/picture alliance/Getty Images

So far, of course, the Russian government has not said that it will officially recognize the results of the referendum. But it would be extraordinary if an apparently synchronized and organized process in Moscow were rejected in Moscow. The referendum organized in Crimea in 2014 was ratified by Russian lawmakers within a week.

Putin has always been guided by the desire to baffle his opponents, whether it be about the timing of the offensive against Ukraine (and, indeed, whether there would be one at all), its ultimate goals, the use of natural gas and oil as political weapon, including the potential use of nuclear weapons to protect the homeland.

This last tactic is true to form. It probably dashes any hope that this war will end soon, but it also shows that Putin’s options are shrinking in the face of military shortcomings that defy any quick fix. As he increases the knowledge of the magnitude of the losses, he has to correspond with an action of equal magnitude.