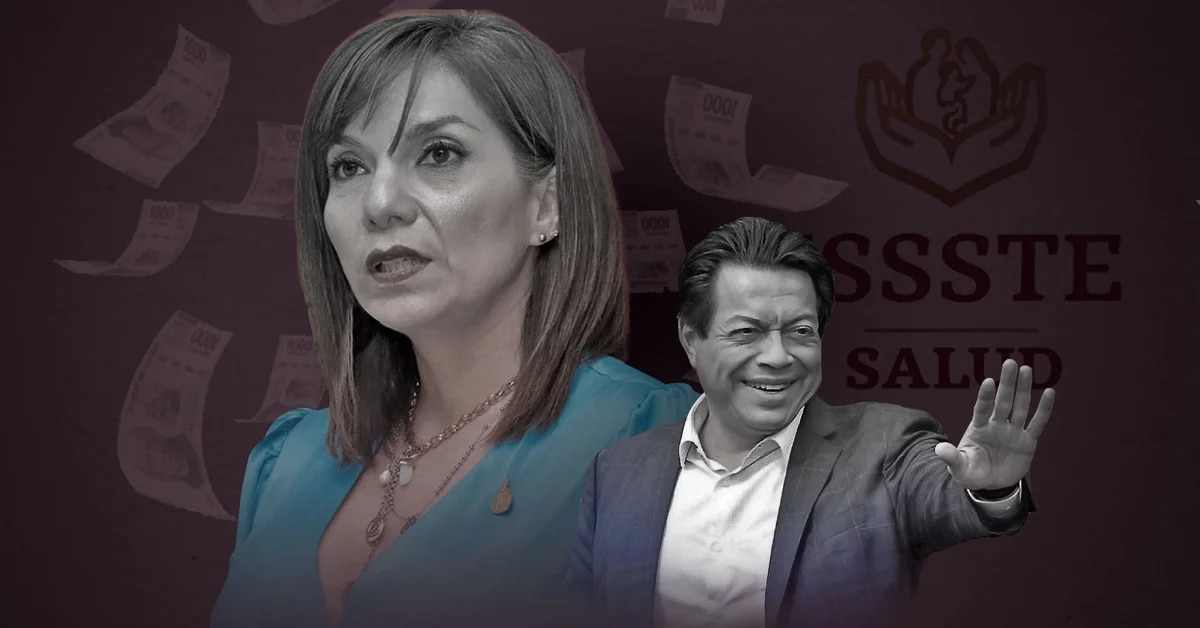 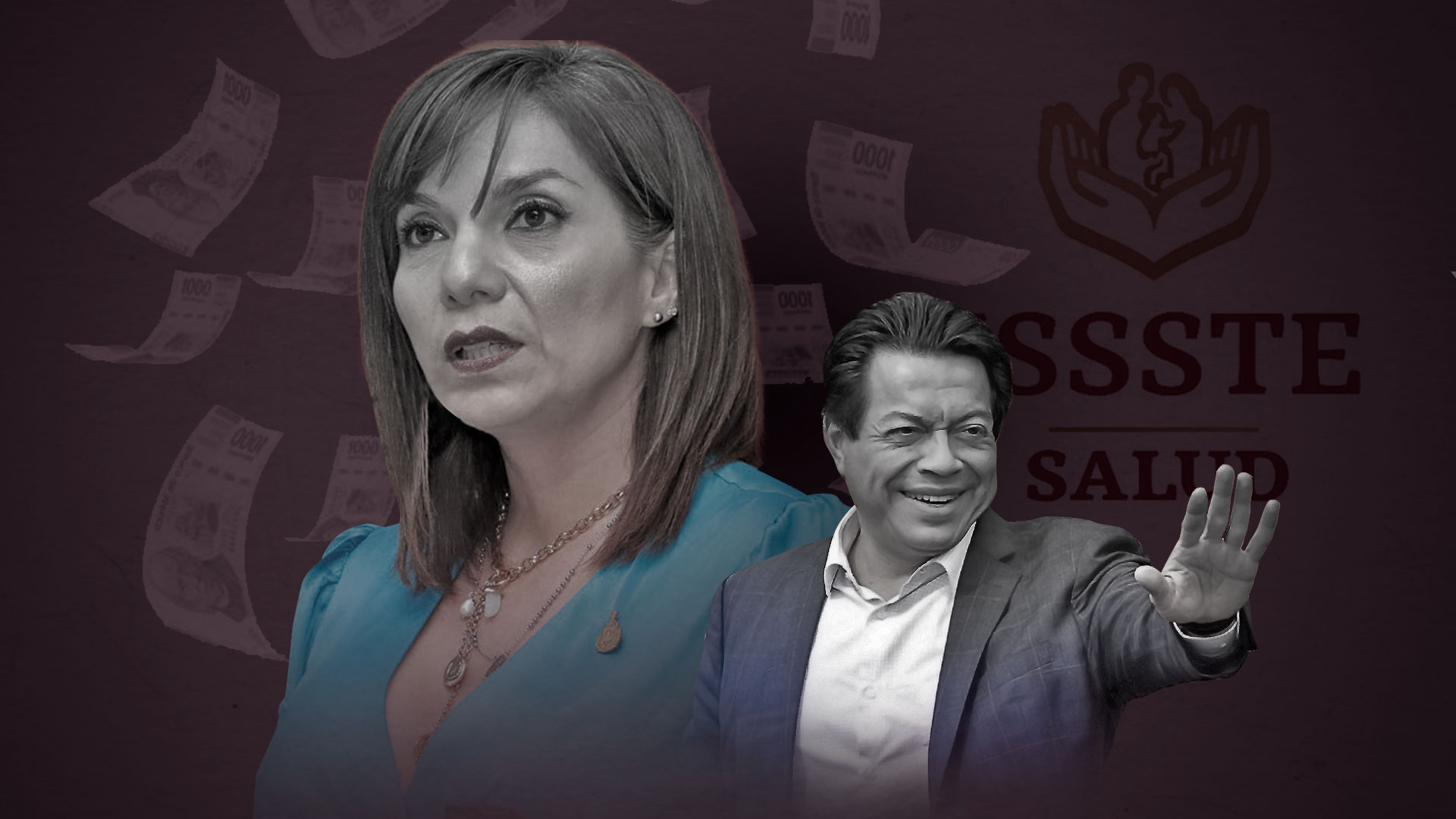 Leticia Delgado Carrillo, Mario Delgado’s sister, is one of the members of the ISSSTE Surveillance Commission who receives a six-figure gross salary. (Image: Jovani Pérez/Infobae Mexico)

Almost 30 thousand pesos is the sum that separates the salary of Leticia Guadalupe Delgado Carrillo of his brother’s, Mario Slimcurrent president of the National Executive Committee (CEN) of the National Regeneration Movement (Brunette).

Data consulted by Infobae Mexico through the National Transparency Platform (PNT) and the Ministry of Public Administration (SFP) revealed that since taking up their current position at the Institute of Security and Social Services for State Workers (ISSSTE) in January 2022, Leticia Delgado has received a gross salary of up to six figures.

As Technical Secretary of the Institute’s Surveillance Commission, Leticia Delgado receives a total monthly salary of 141,394 pesos. Subtracting the amount corresponding to taxes, the Net income of the sister of the president of Morena remains in 98 thousand 268 pesos per monthwhich corresponds to approximately 3,275 pesos per day, equivalent to 12 minimum wages.

This figure is considerably higher than the perception of the morenista leader, whose gross salary is 92,450 pesos. Discounting taxes, the leader of the icing party currently receives 69 thousand 187 net pesos (with data updated to June 30 of this year). 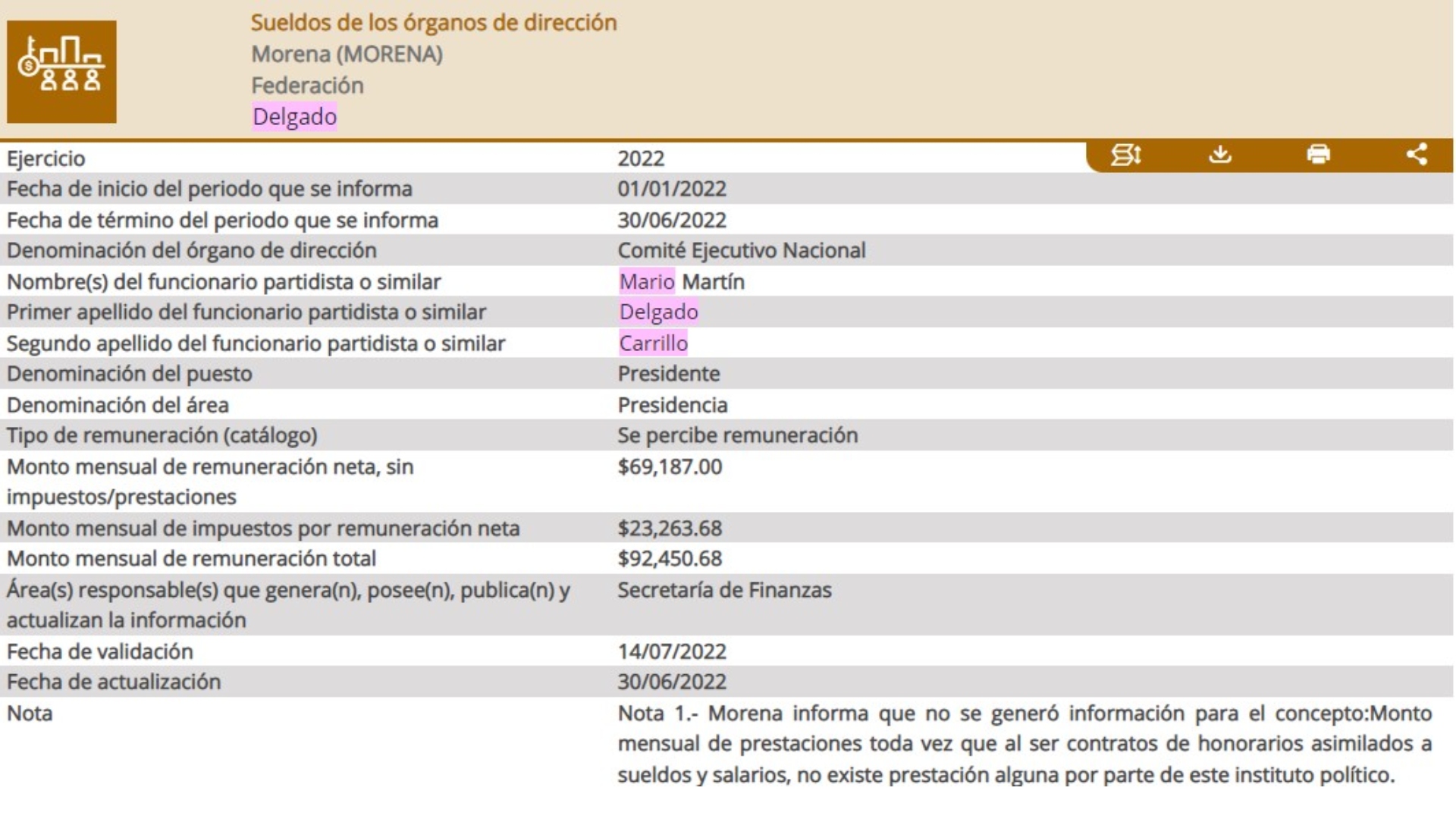 With a degree in Tourism Business Administration and a diploma in Computer Science, Leticia Delgado Carrillo has been working at ISSSTE for 28 years. In 1994 she came to the government organization as Head of Office at the ISSSTE Colima Cultural Center Delegation and four years later, in 1998, she became Head of Section in the Department of Pensions and Safety and Hygiene.

In those years, his brother Mario Martín was completing his professional studies in Economics, prior to his arrival in the public administration of the then Federal District, where he obtained his first position as Executive Director of Informatics and Statistics at the Ministry of Public Security in 2002.

The most recent records of Leticia Delgado in academic life indicate that she began a master’s degree in Applied Public Management in Monterrey in 2010, but did not finish it. 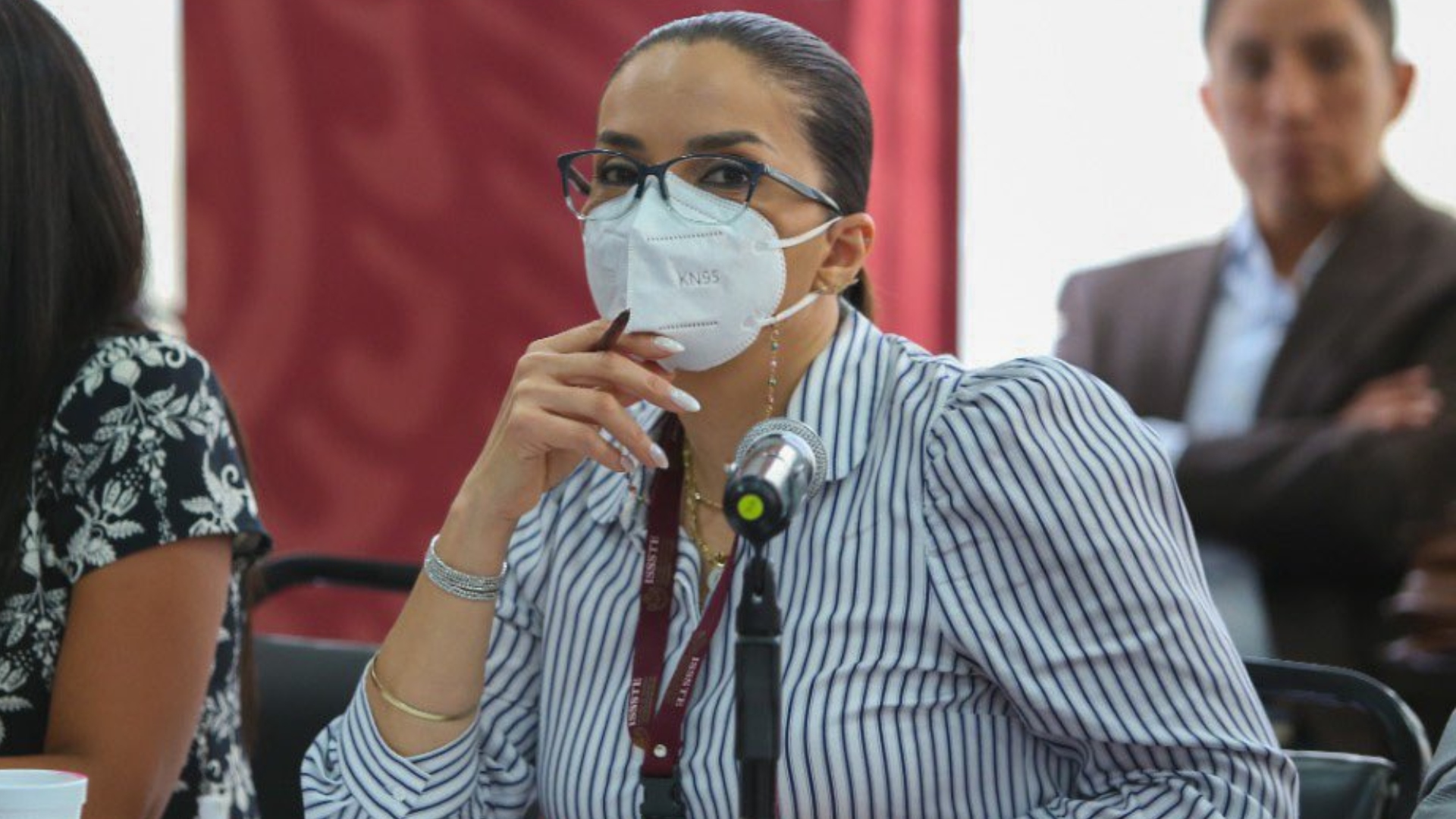 Leticia Delgado has worked at ISSSTE for 28 years. (Photo: Twitter/@Leti_DelgadoC)

In addition to her time at ISSSTE, the sister of the current leader of Morena was General Administrative Director at the Secretary of Health and Welfare of the State of Colima from 2017 to 2019. Years before, between 2009 and 2012, she was Head of the Department of General Services and Special Events in the capital of that same state. There are no public records about her work since her departure from the state administration until her return to the ISSSTE.

Guízar Medina, as Category B Coordinator of the Secretariat of Administration and Finance of Mexico City, receives a net salary of 37,384 pesos per month. Miguel Carrillo, for his part, is federal deputy of Morena and receives the diet corresponding to 105 thousand 378 pesos gross, for which his net salary is 75 thousand 205 pesos.

Reviewing public records, it is possible to find that Leticia Delgado is not the only member of the Commission who receives a six-figure salary. The members of this governing body who receive a salary close to and even higher than that of the sister of the president of Morena are:

– Gustavo Rendon Huerta. Representative of the Ministry of Finance and Public Credit (SHCP) and head of the General Directorate of Legal Affairs of the Treasury of the Federation of that dependency. Gross salary: 147 thousand 757. Net salary: 102 thousand 691 pesos. 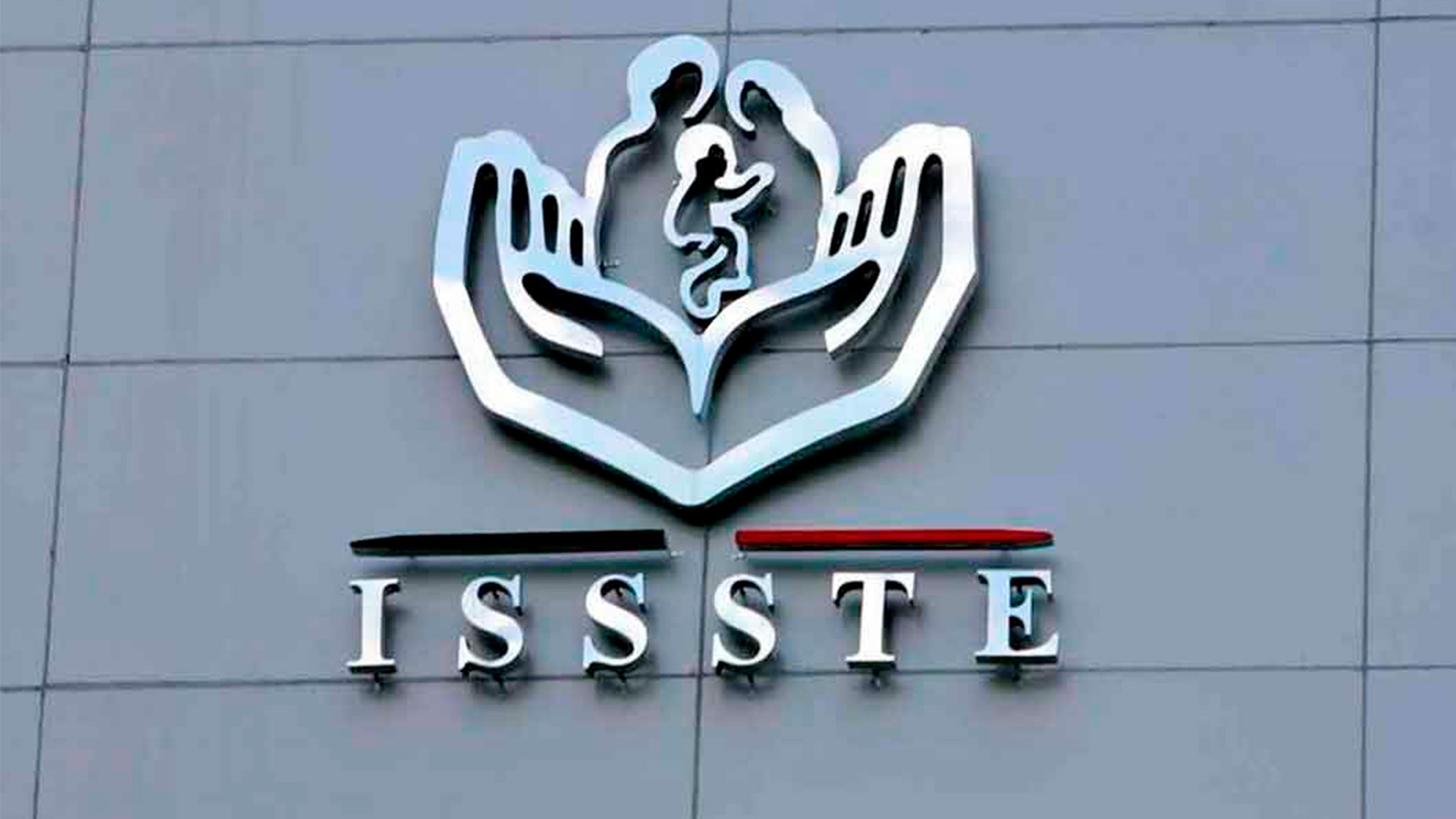 Most of the members of the ISSSTE Surveillance Commission receive a monthly net income of more than 90 thousand pesos. (Photo: CUARTOSCURO)

– Luis Antonio Garcia Calderon. Representative of the SFP and head of the Internal Control Body at the ISSSTE. She receives a gross salary of 141 thousand 394 pesos, which is reduced to 98 thousand 268 pesos net.

– Alejandro Manuel Vargas Garcia. Representative of the Ministry of Health, in charge of the Office of the Undersecretary of Integration and Development of the Health Sector and head of the General Directorate of Planning and Development in Health of that dependency. Gross salary: 136 thousand 158 pesos. Net income: 94 thousand 629 pesos.

– Rolando Mendez Chayeb. Representative of the SHCP, head of the Deputy General Directorate of Programming and Budget of Health and Social Security of that dependency. His gross income is 112 thousand 980 pesos which, after the discounts contemplated by law, remain in 81 thousand 356 pesos.

The Law of the Institute of Security and Social Services of State Workers establishes, in its article 224, that the Surveillance Commission is the one assigned to attend to compliance with the legal provisions to which the Institute is subject. 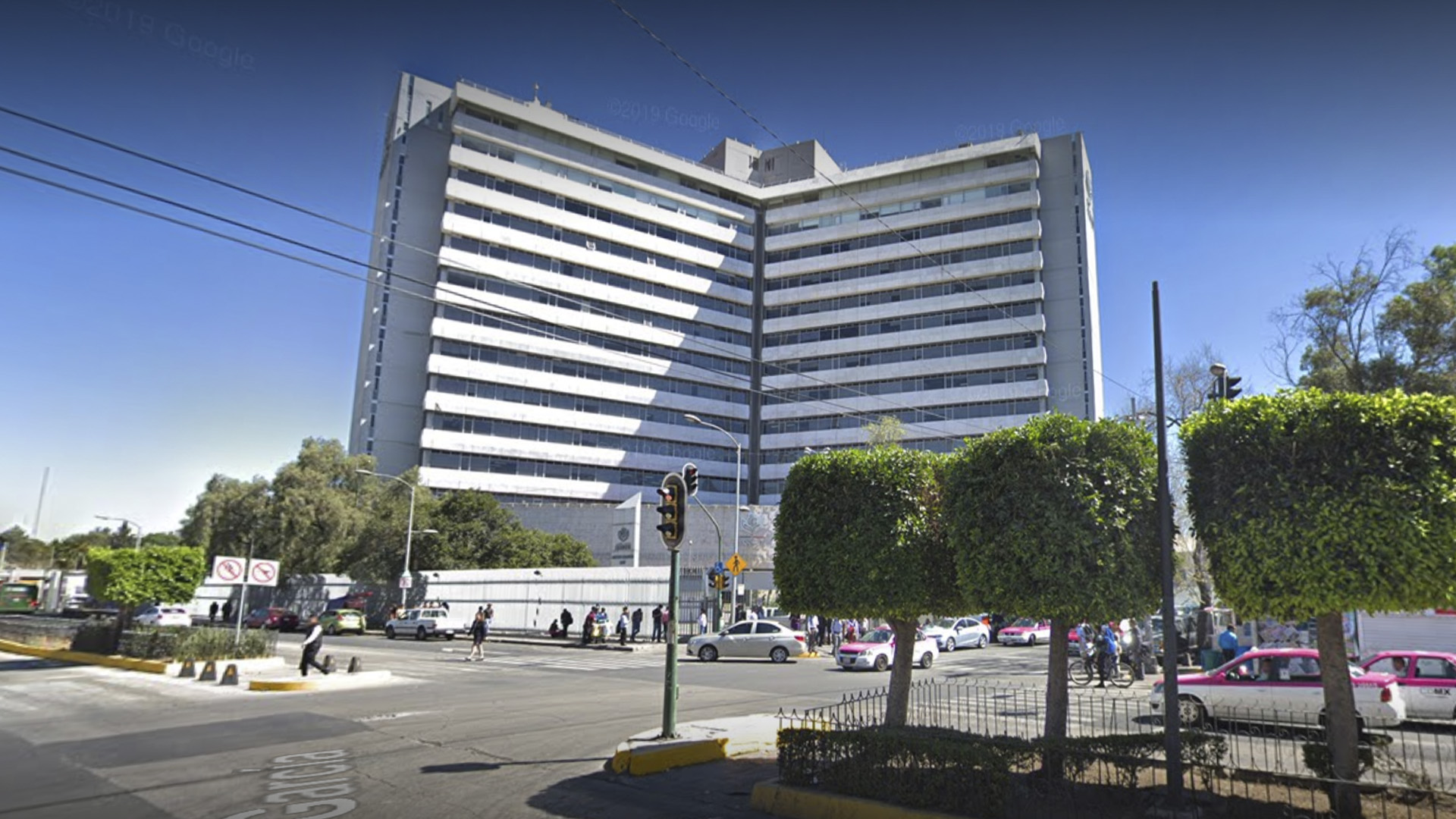 Likewise, it is in charge of verifying that investments and resources are used for the purposes contemplated in the budgets approved.

It should be noted that last June, the Mexican Institute for Competitiveness (IMCO) pointed to the ISSSTE as the fourth institution with the highest risk of corruption among all those of the Federal Public Administration.

Above the ISSSTE were located the National Institute of Health for Well-being (insabi), the Mexican Mint (CMM) and the Mexican Social Security Institute (IMSS).

When contrasting the monthly figure received by Leticia Delgado with the salary of other Morena public servants, it is possible to identify that the sister of the party leader earns more than one of the candidates for the presidential candidacy.

On the one hand, according to the salary tabulators of the Mexico City government, the capital’s president claudia sheinbaum has a gross monthly salary of 11 thousand 178 pesos, a figure that drops to 81 thousand 948 pesos net. That is, 16 thousand 320 less than Leticia Delgado Carrillo.

As for the rest of the members of the 4T who aspire to get their candidacy for 2024, Ricardo Monreal receives a net income of 114 thousand 608 pesos for his monthly allowance as coordinator of the Morena parliamentary group in the Senate, according to data from the PNT. 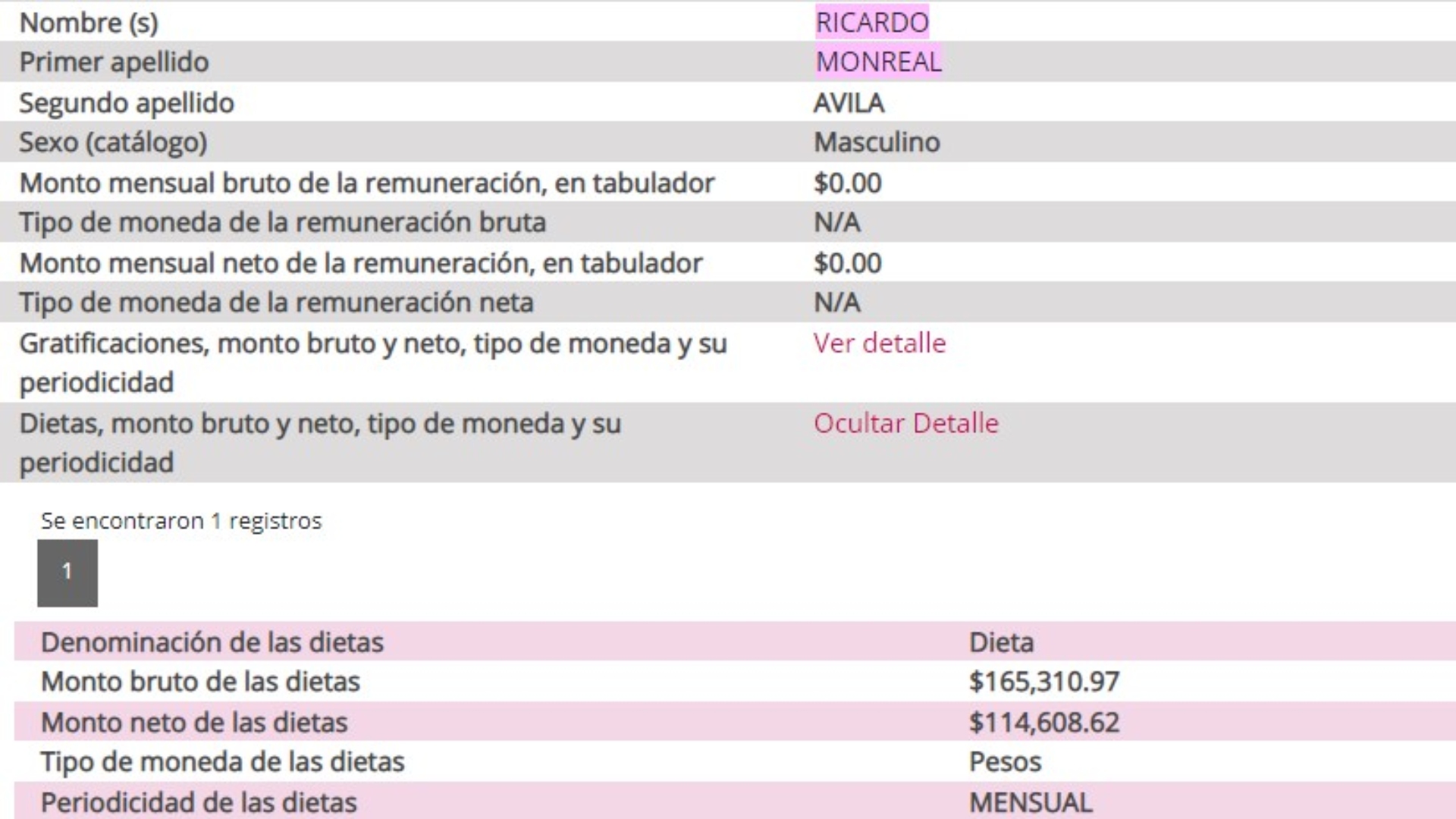 Capture of the most recent public information regarding Ricardo Monreal’s diet, cut off on March 31, 2022. (Capture: PNT)

It should be noted that this figure does not coincide with the one recently recognized by himself, since before the media he declared, under word of truth, that he only received the diet corresponding to 119 thousand pesos per month.

In the case of the other two candidates for the 2024 candidacy, their gross income exceeds 150 thousand pesos. Marcelo Ebrard Casaubón and Adán Augusto López, Secretaries of Foreign Affairs and of the Interior, respectively, have a total salary of 164,960 pesos. Discounting the amount corresponding to taxes, both officials earn 114 thousand 647 pesos, almost 16 thousand more than Leticia Delgado.

José Narro accused the DEA of “interventionism” for documents that link Morena with the narco
New twist in the case of missing Marines: CDN operator financed Morena’s campaign in Tamaulipas
“Under word of truth”, this is the salary that Ricardo Monreal claimed to have as a senator

Previous They filter mail with Messi’s demands to renew with Barcelona
Next Sage, the son of Sylvester Stallone who died of strange causes at a very young age