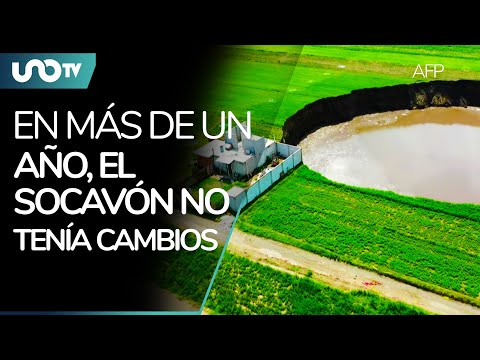 The Puebla sinkhole recorded a new landslide, after its formation in May 2021. Authorities are investigating the reason for this event, but they anticipated that it could be due to the rains recorded in the last hours in the town of Juan C. Bonilla.

What is known about the new landslide in the Puebla sinkhole?

Around 11:00 p.m. this Monday, state police officers in charge of monitoring the area notified Civil Protection personnel that a loud rumble was heard in the area of ​​the sinkhole; during the early morning, personal he observed a tearing on the west side.

Due to heavy rains in the region of Puebla municipality of Juan C. Bonilla, a landslide was recorded on the southwest side of the gigantic sinkhole of the community of Santa Maria Zacatepec; This was confirmed by state government authorities, who are already working at the point to learn about the new sinking dimension.

This Tuesday, the Secretary of the Interior of Puebla, Ana Lucia Hill Mayoralconfirmed the detachment and argued that it would have occurred due to a heavy rain recorded for two hours, which would have caused the splitting in the southwest wall of the sinkhole. He mentioned that staff from Civil protection performs overflights with a drone to learn the new dimensions of the sinking, which will be announced as soon as the official report is generated.

What is remembered of the sinkhole in Puebla?

It should be remembered that the gigantic sinkhole of Santa María Zacatepec originated the afternoon of May 29, 2021. At that time, a sinking 5 meters in diameter on farmland caught the attention of the Sánchez Xalamihua familysince your home is found a few meters.

As the hours passed, for May 30had already reached dimensions of up to 60 meters in diameter and, with the passing of days, the sinking reached more than 100 meters in length.

The Secretary of the Interior of Puebla established the length of the sinkhole in 123 meters in the minor axis and 126 meters in the major axis; however, with the sinking of the last few hours, state authorities will announce the new shape and size.

It is worth mentioning that for more than a year the sinkhole did not change in size, but the rains and, probably, the earthquake of September 19 would have caused the change in its dimension.

Previous Habitat Inmobiliaria launches Habitat+ to continue betting on the comprehensive well-being of its employees
Next Karely Ruiz, this is how she went from earning 20 thousand pesos to being Top5 in OnlyFans