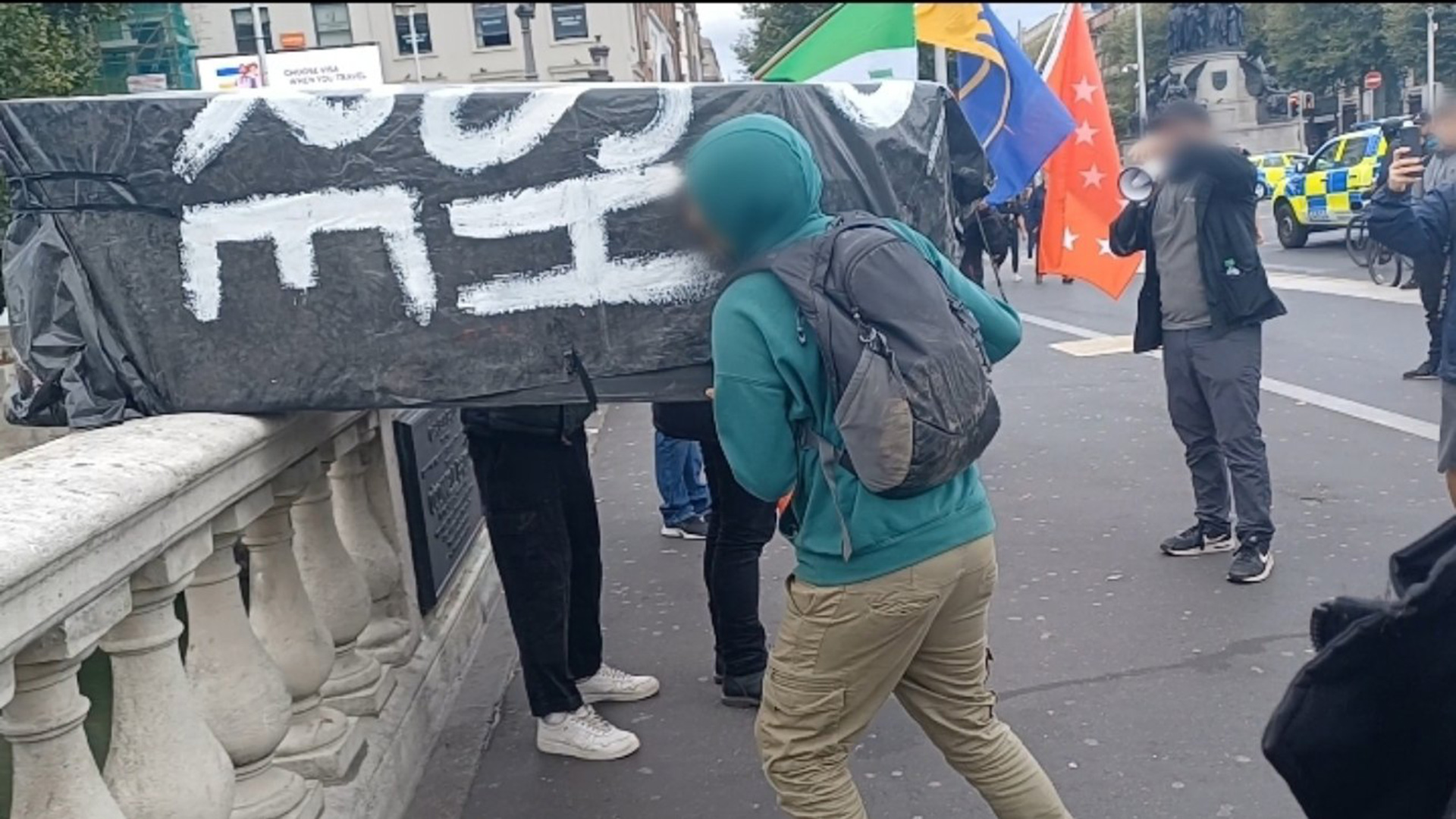 Moment in which the protesters throw the coffin (@AIAIreland)

This Monday, coinciding with the state funeral and the burial of Elizabeth II in London, anti-imperialist protesters threw a coffin with the legend “RIP British Empire” to the River Liffey in the center of Ireland’s capital.

The protest action is part of a demonstration against the British crown called by Ireland Anti-Imperialist Action and aims to recall the one carried out in 1897 by the left-wing Irish nationalist leader James Connolly, coinciding with the visit of Queen Victoria.

The demonstration was called to protest “against the humiliating worship of the English monarchy by the ruling class of the “Free State” of Ireland. 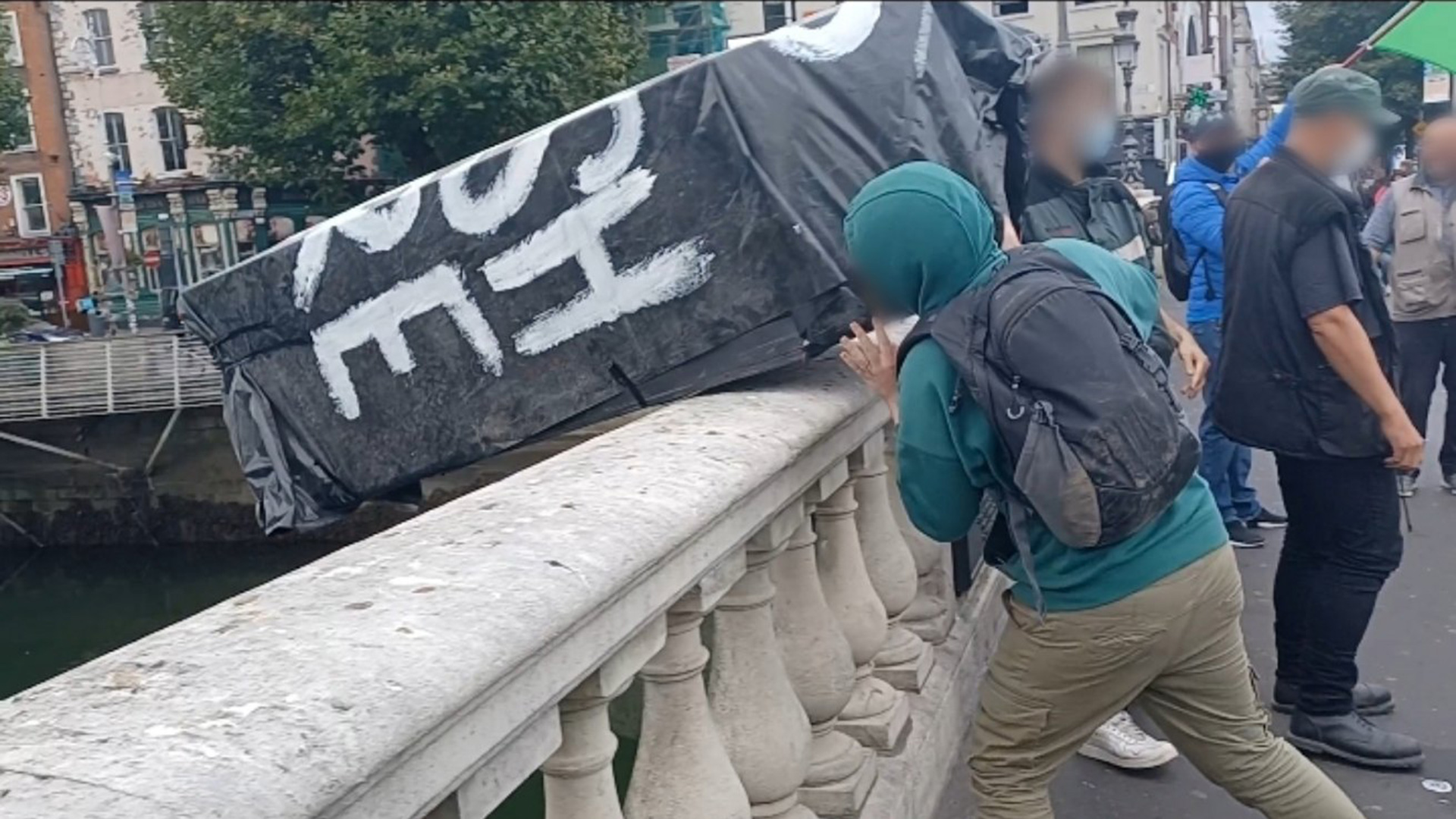 They also reproached the authorities for flying the Irish flag at half-staff during the day, reports the news agency The Press Association.

The remains of Elizabeth II were buried on Monday along with those of her parents, sister and husband in a chapel at Windsor Castle church, ending funeral tributes for the queen who died 11 days ago.

“The queen was buried next to the Duke of Edinburgh in the King George VI Memorial Chapel.” in a private ceremony reserved for the closest relatives, announced a statement from the British royal family released on its official website. 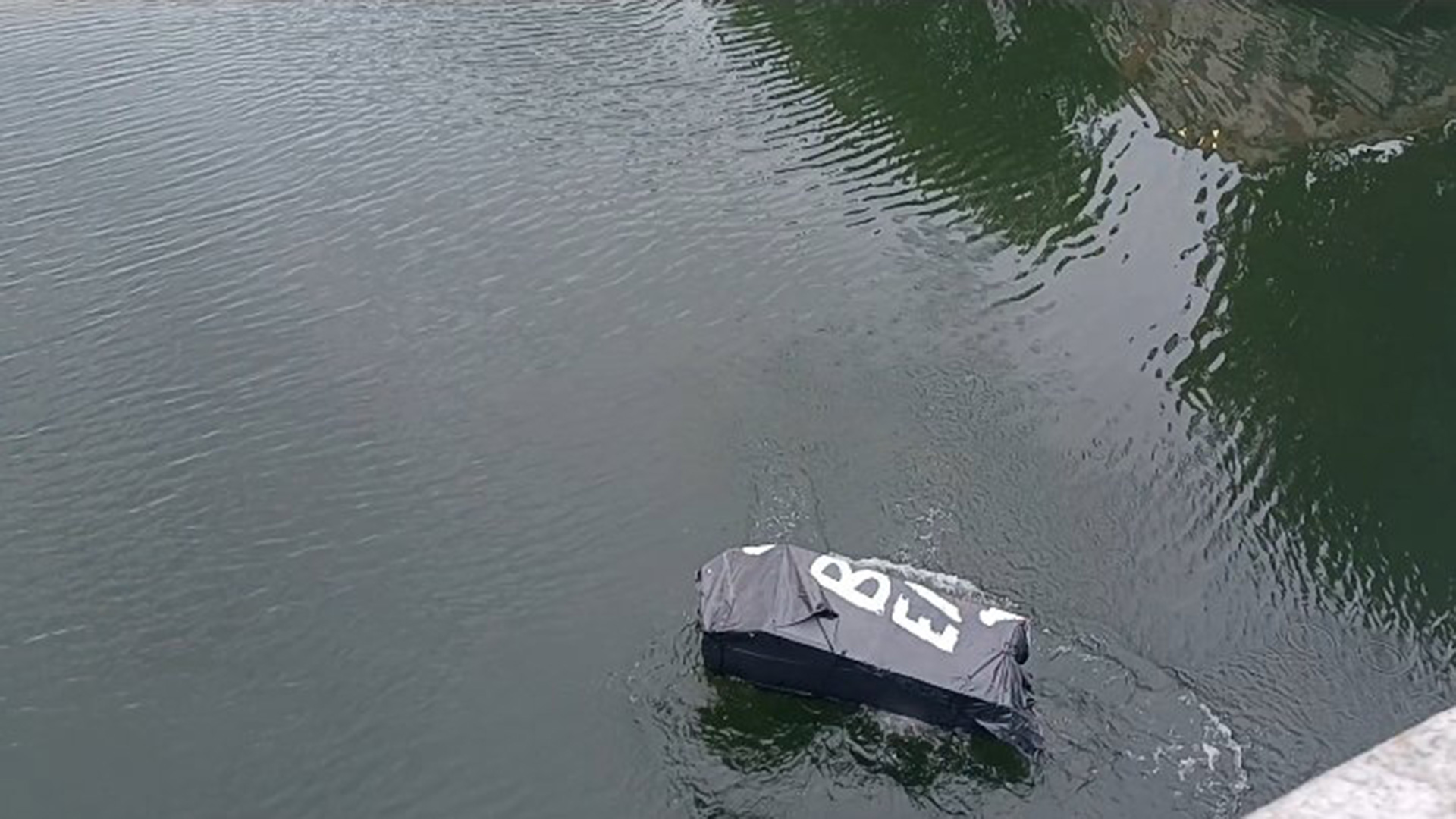 Around 3:30 p.m. local time (2:30 p.m. GMT), the queen’s coffin entered the town of Windsor, located west of London. Just over an hour took the hearse to travel the 35 kilometers that separate the Wellington Arch, the place from which the car left after the funeral in Westminster Abbey, from Windsor Castle, where people were able to give a final farewell.

With a strong escort and with the presence of thousands and thousands of people in the streets of the town, the coffin with Queen Elizabeth II entered what has been her most common residence and from there it went to the Chapel of Saint George, located just a few meters from the castle, where a small service was held, as agreed with the monarch before her death.

Emma, ​​the monarch’s pony, stands by as the ceremonial procession of Queen Elizabeth II’s coffin arrives at Windsor Castle for the burial service at St George’s Chapel. September 19, 2022. Andrew Matthews/Pool via REUTERS

Once the coffin was placed on the altar, members of the royal family took their places. The first, King Charles III, cheered on his arrival at Windsor and accompanied by his brothers and his children.

In total, some 800 guests gathered in the chapel, including the King of Spain, Felipe VI, and his mother, Sofía. Queen Letizia, who had to take a flight to New York, was not there, nor was the emeritus Juan Carlos, who declined the invitation. Other world leaders, such as the president of the United States, Joe Biden, were also not present at this second service, and left for New York for the United Nations Assembly that begins this week.

LIVE: The coffin of Queen Elizabeth II arrived at Windsor Castle and will be entombed in the crypt of St. George’s Chapel
Kate Middleton and Meghan Markle chose Elizabeth II jewels and rigorous mourning to fire the queen
Prince Harry is devastated by an almost unnoticed detail in his military uniform