In Mercado Libre, a print of Lionel Messi belonging to the Panini album is drawing attention for its price: up to 40 thousand pesos.

There are 61 days left until the start of the Qatar 2022 World Cup, one of the most anticipated sporting events of the year and for which a total investment of 1,696 million dollars will be allocated for the tournament, according to data from the International Federation of Football Association (FIFA).

It is also a long-awaited show by football fans, after attendance at the stadiums was prohibited as a result of the pandemic and it is until this year that, once again, the same atmosphere is being experienced as knew.

data published by the UEFA, the governing body of football in Europereported until May of last year, a loss of 8,100 million euros as part of the impact generated by the presence of Covid-19.

On the other hand, in Mexico, Mikel Arriola, president of Liga MX, announced that the effects of the pandemic were strong for the tournament teams. According to what he stated in an interview with local media, Liga MX reported losses of up to 1.4 billion dollars, also revealing that each of the clubs lost up to 40 percent of their incomewhich in figures translates to 77 million dollars.

Up to 40 thousand pesos: the price of Messi’s stamp from the Panini album

2022, as already stated, is presented as a year in which the return of fans to the stadium is more than evident; a World Cup year for which various brands are already working on their positioning strategies in one of the largest sporting events.

So far, according to data revealed by FIFA, up to 2.5 billion tickets have been sold for the World Cup. Furthermore, just in terms of sales of merchandiseheThe institution has already secured the amount of 5 thousand 518 million euros.

And it is that the fury of the fans in the World Cup season seems to have no limits, which can be seen with the launch of the already traditional Panini Album that, for years, has become a true collector’s item.

On the one hand, a few days ago, The case of a teenager who used all his savings to buy his album of prints, for which he ended up paying more than 1,800 pesos, went viral.since it includes 134 envelopes with five figures each.

Now, as part of the euphoria that is experienced with the said collector’s item, In Mercado Libre a stamp of the Argentine soccer player Lionel Messi is being sold for up to 40 thousand pesos and, in fact, there are those who offer monthly “low payments” of up to 3,333 pesos. The reason why it is sold at that price is because, supposedly, it is very difficult to get it organically. 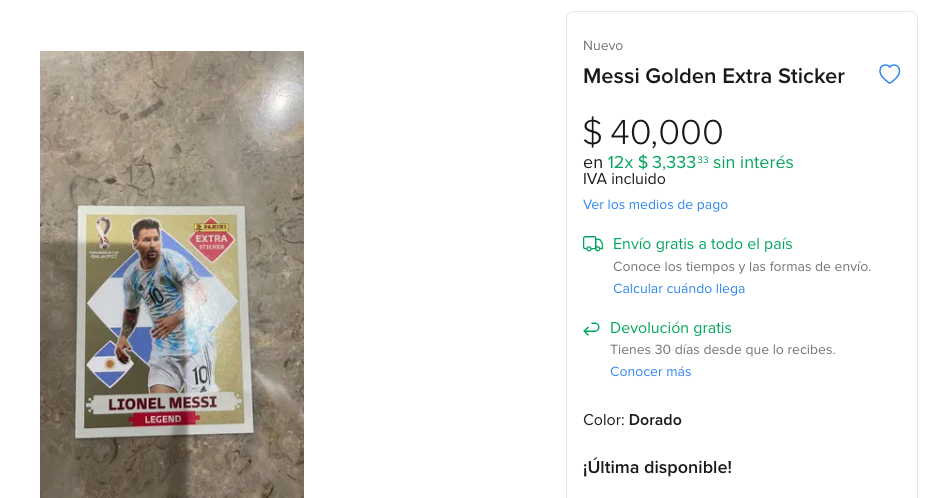 For collectors, the Panini album has become indispensable, a fact that, on many occasions, brands can take advantage of for the sake of positioning.

A study carried out by Brand Finance reveals the ten most valuable brands for collectors, with LEGO being the most valuable on the market.

In the case of Panini, although it is not one of those ten brands that Brand Finance mentions, its presence in each World Cup fair has not gone unnoticed and, even with social networks, there are specific groups for the exchange and sale of stamps.

Previous Gerard Piqué and Clara Chía, 2 lovers who stir up Paris
Next Activate protocol for earthquake of 5.8 in Tecomán, Colima during the early morning