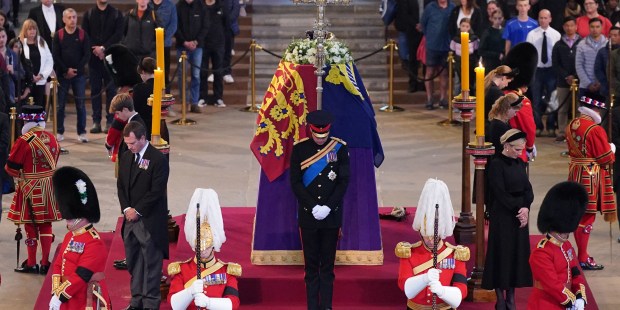 It is the first time in history

If we review again the communications of some of her grandchildren, it is interesting to see that, although a certain formality is required in these cases, they all called her first grandma (Grandma) and they did not stop sharing intimate moments that they lived with her and thanking her for all the lessons that she left them.

A novelty that follows the tradition

The Vigil of the Grandchildren complements the tradition of the Vigil of the Princes. That tradition is, in fact, recent. Started on 1936when King Edward VIII and his three brothers, Albert, Henry and George, surrounded their father’s coffin, king george v. Since then it had only been repeated in 2002 with the queen mother.

With the death of Queen Elizabeth II, on the 16 the Vigil of the Princes took place withthe already king Carlos III and his brothers Ana, Andrés and Eduardo.

«The world lost an extraordinary leader, whose commitment to the country, to the kingdoms and the Commonwealth was absolute (…) I, however, I have lost a grandmother. And though I’ll mourn the loss of him, too I feel incredibly grateful. She was by my side in my happiest moments, and she was also by my side during the saddest days of my life ».

“Grandma, while this final farewell brings us great sadness, I will be eternally grateful for all of our first encounters, from my earliest childhood memories with you, to meeting you for the first time as my Commander-in-Chief, to…he first moment you met my dear wife and hugged your beloved great-grandchildren. I appreciate these moments shared with you and many other special moments (…) We also smile knowing that you and grandfather are reunited now, and both together in peace.

Beatrice and Eugenie of York they expressed:

“Dear Grandma. It has been the honor of our lives to have been your granddaughters and we are very proud of you (…) You were our matriarch, our guide, our loving hand on our backs that led us through this world (…) Thank you for making us laugh, for including us, for picking heather and raspberries with us, for our teas, for comfort, for joy.”

Since the 1960s, there has been a theory that some women, between 45 and 55 years old, experience a kind of adaptation where their priority is to survive to take care of their grandchildren once they enter a non-reproductive age.

Even decades later, in the 1990s, the North American anthropologist Kristen Hawkes He investigated the importance that grandmothers had in prehistory in favor of the evolution of the human species, taking care of the grandchildren while the parents went to their hunting and gathering tasks.

Of course, modern family dynamics have changed; however, it is curious that now again we see many grandmothers taking care of their grandchildren because the father and mother must work full time and, financially, it is not always possible to hire someone (or they prefer grandparent care).

Honor and love each other in life

Undoubtedly, this historic vigil is, on the one hand, a reminder to grandparents of the important and significant role they can play in the formation and life of their grandchildren.

This does not mean that they should interfere with your parent’s education, but they can offer a different help, that only the experience of their lived years can offer. It is a unique and wonderful complicity. In addition, they are the ones who most of the time help maintain the love and values ​​of the family.

And on the other hand, it is a reminder to the grandchildren to honor their grandparents also in life. To visit them, call them, love them and ask them for advice… because it is those memories that will comfort us when they are no longer physically there, and because they have lived much longer than us and can give us a lot of wisdom but above all a lot of love.

Hopefully the Grandchildren’s Vigil will become a new tradition not only in the royal familybut in any family that wants to honor their grandparents.

Previous Earthquake in Mexico today, last minute live | News, affected states and magnitude of the earthquake
Next Rockstar Games confirms the leak of the videos and images and will continue with its development as planned