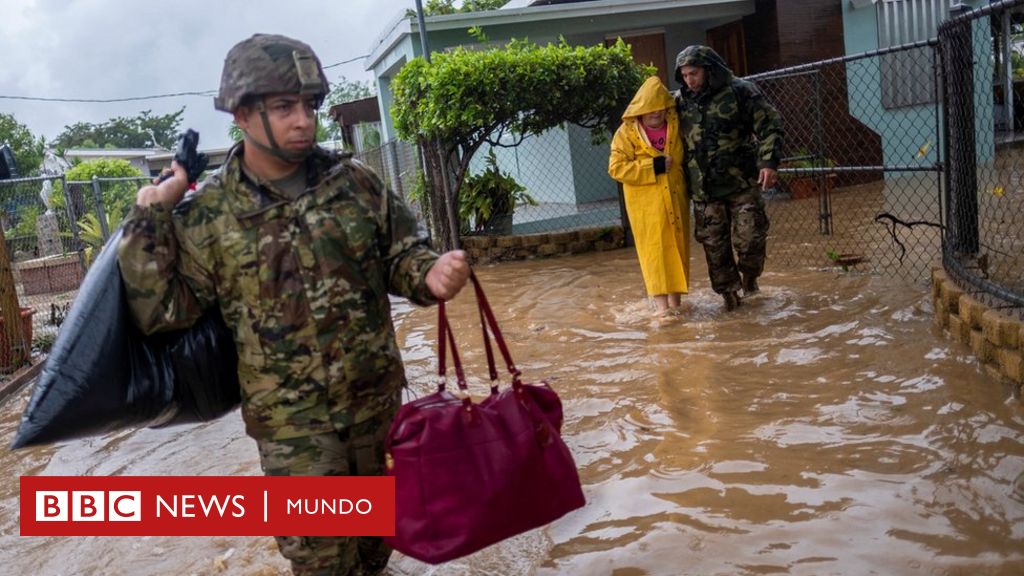 Hurricane Fiona | “I have never seen anything like it”: the serious flooding and destruction caused by the cyclone in Puerto Rico

Puerto Rico is facing a new natural catastrophe when it has not yet recovered from Hurricane Maria, which exactly five years ago devastated a large part of this US territory, causing the death of almost 3,000 people and damage estimated at billions of dollars.

This time it was the hurricane Fionawhich with category 1 began to hit the island on Saturday with torrential rains and sustained winds of 137 km / h, and whose effects were still wreaking havoc this Monday, despite the fact that the system was over the Dominican Republic.

So far, local media have reported on the death of four peoples due to direct or indirect effects of the cyclone, while some 2,000 are in state shelters.

Videos of complex rescue operations, led by the military, local security agency personnel and the affected communities themselves also made the rounds on the internet.

Since Sunday, when there was a general blackout that left more than 1.4 million customers without powerOnly 100,000 have regained power, leaving hospitals and senior care centers running on generators.

66% of the clients of the public drinking water company did not have service, according to the local government website.

“You still can’t say it’s a historic event, but you could say it’s been a significant system,” Emmanuel Rodríguez, a meteorologist with the US National Weather Service in San Juan, told BBC Mundo.

According to the expert, in the US territory it has rained for about 60 hours since the weekend began. The accumulations of rain, which have not yet been calculated because the precipitation continues, are currently around 63.5 centimeters.

Although the authorities are in the first phase of responding to the emergency and do not have exact numbers on the damage, the event, according to Governor Pedro Pierluisi, left “catastrophic” losses on an island that has struggled for two decades with a debt public that has had difficulties to pay.

“In many areas that have never had floods, there has been unprecedented accumulation of water. In fact, in many areas it has been greater than what we saw in Hurricane Maria,” the governor said at a press conference.

Rolando Ortizmayor of Cayey, a town in the central mountainous area of ​​the island, affirms that the rains from Hurricane Fiona have done more damage than those caused by Cyclone María.

Five years ago the system, which reached the Caribbean island as category 4, caused an accumulation of about 101.6 centimeters of rain, but this occurred in isolated municipalities. This weekend’s tropical system had effects on all of Puerto Rico.

Cayey, a town with a complex mountainous topography where some 40,000 people live, is crossed by several rivers and streams. This Monday the mayor stated that almost all the neighborhoods of the town were cut off, and his staff was working in a hurry to remove debris from highways and roads so that the population could transit.

This town was the scene of a dramatic rescuewhen a two-story house in which there was a family was trapped by a rising river.

“I spoke with the governor and they made rescue resources available to me and they were on their way. But the neighbors became anxious. They take heroic risks. One of them had a small motorized raft, they tied it with a rope to a car and managed to get to the house and rescue them,” he said.

In Vega Alta, a town in the north of Puerto Rico, a woman was also trapped by a flood on a highway that she tried to travel. The mayor of the municipality, María Vega, told BBC Mundo that she had been holding on to a tree for nine hours since Sunday until they managed to save her life.

“I was present there all night. She called 911. We arrived with the fire department, but when we tried to reach her with the truck, the current moved it. Then we tried with a National Guard truck and even a human chain, but it was not possible because the height of the water exceeded five feet [1.5 m]”, he recounted.

“It was dark, we heard her scream. As the hours passed, we lost hope. When her voice began to diminish and she responded slower, we went into hysteria. We cried a lot,” he added.

In the end, firefighters hit the woman with a motor barge.

Luis Miguel Sanabria, a 32-year-old firefighter, was part of the team that rescued some 20 people in a neighborhood of Salinas, a town in southern Puerto Rico that is among the most affected by the rains and where there are 400 displaced people.

“This rescue operation started because they contacted us through social media,” he said. “The houses were under water. I’m six feet [1.83 m] and the water was four feet [1.2 m]”, added the 32-year-old man, who also said that among those helped there were children.

In his ten years as a firefighter, he notes, “I’d never seen nothing like it“.

According to General José Reyes, who heads the Puerto Rico National Guard, around 1,000 people have been helped in some 25 municipalities.

For five years, Puerto Rico has been struggling to rebuild its basic services infrastructure, affected by Hurricane Maria.

During that cyclone, which occurred on September 20, 2017, the island was left in a general blackout. A year after the atmospheric phenomenon, there were still communities without electricity.

The territory, which has an old power grid that developed during the second half of the 20th century, has failed to modernize it, despite the fact that the US Congress approved billions of dollars after Maria.

In past years, island officials have accused the US federal government of placing bureaucratic obstacles to the disbursement of funds, while federal authorities have made allegations of corruption or non-compliance with current regulations.

“The infrastructure is back on the ground again. The projection after Maria is that it would take 20 years to repair. Now we are in a difficult moment…” Mayor Ortiz regretfully says.

Previous Santos vs. FC Juarez (2-0). GOALSHalftime
Next Alan Ibarra is the fifth eliminated from reality among sauces, Mexican snacks and tamales