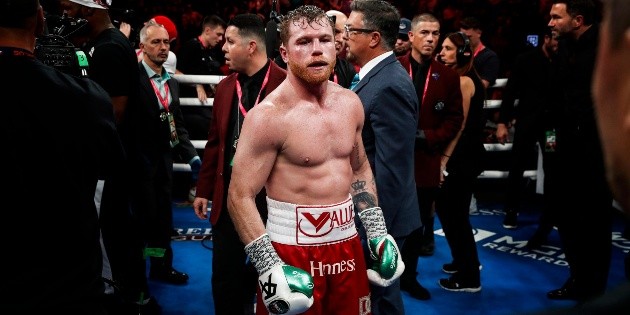 Canelo Álvarez: Will he fight Benavidez? The Tapatio explodes and this says


Saul “Canelo” Alvarez defeated Gennady Golovkin by unanimous decision at the T-Mobile Arena in Las Vegas and with this he closed the undefeated trilogy against the Kazakh fighter.

As usual, he offered a press conference after the fight against “GGG“and he was asked about different fighters he could face, one of them the Mexican David Benavidezwho has constantly expressed, along with his surroundings, his desire to measure himself against the “Cinnamon“.

The boxer from Guadalajara and multi-champion did not welcome the suggestion of a fight against Benavidez and it is that in addition to pointing out that he will not fight against Mexicans, he also attacked David and your team.

“When I said that I do not fight with Mexicans, it is because I feel that I represent Mexico and they are not the same as me, that’s why I say it and it’s not arrogance. I have shot the best in the world, please, how am I going to fight with Benavidez who has not won anything. He has only beaten one world champion and has faced all the other losers. Don’t disrespect me with that, “he launched”Cinnamon“.

visibly upset, Saul Alvarez He concluded by asking that his career not be disrespected by telling him that he “does not want” to fight against a certain boxer, because he has always shown what he is capable of above the ring.

Previous ‘House of the Dragon’: The true story of Ser Criston Cole’s spite
Next An Engineer for a Convicted Drug Trafficker: US and Afghanistan’s Taliban Government Conduct Unusual Prisoner Swap