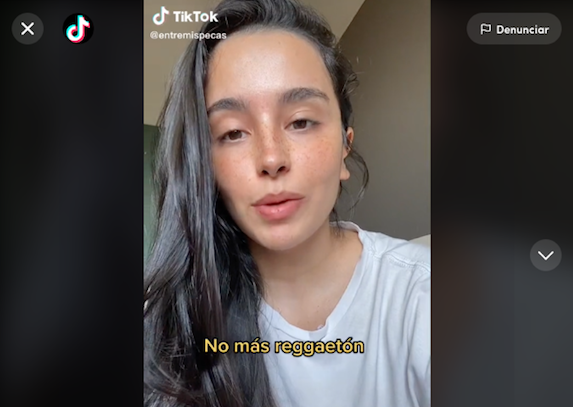 Through a video on TikTok, a woman explains the reasons why she has decided to stop listening to reggaeton, the musical genre that has reigned in recent years.

It is no longer a secret that reggaeton has become the music of young people, of the new generations; a musical genre that has yielded revenues of up to 8.9 billion dollars just for sales in streaming.

We are talking about one of the most listened to and analyzed sounds for years, where its greatest exponents are, at present, J Balvin, Maluma and, above all, Bad Bunny, this being the most popular.

According to data from kworb.net, 2021 was the year of reggaeton and K-pop, with Bad Bunny and BTS leading the popularity charts.

Secondly, the so-called “bad bunny” is the most listened to singer on Spotify and YouTube; just on the platform in Stockholm, Sweden, the Puerto Rican has more than 48 million monthly listenerswhile on YouTube it accumulates 10 billion views.

From this point of view, we are talking about the most influential singer in Latin music and a reference for a considerable part of the population, also receiving a large amount of criticism regarding his lyrics.

And it is that, for years, there has been an echo about the lyrical content of many of the reggaeton songs that, over the years, have been positioned in the chartsqualifying them as misogynistic music, among other terms.

A recent study states that “One of the most criticized points regarding the popularity of the reggaeton and the trap in Spanish it is the general idea that people have regarding its content, which is said to be full of sexist or misogynist lyrics”.

On the other hand, the University of Chile announced, through a study, that the “reggaetón is the banner of machismo and misogyny; the singer Maluma the main face”.

TikTok, likewise, has become one of the most used social networks by young people; a space that, moreover, forms part of their way of thinking and acting on a day-to-day basis.

Taking this as a starting point, a woman, through her TikTok account, made a video that she decided to name “No more reggaeton”in which he explains the reasons why he has consciously decided to stop listening to said music.

Among his speech, he mentions that, through reggaeton, “they are selling you the image of an idealized woman. In her videos and lyrics, they are telling us that we are impressionable, manipulable and tameable”.

One of the most notorious cases was that of the singer Aleks Syntek, who has stated on more than one occasion that the reggaeton It is “music for rapists”, alluding to the lyrics of said musical genre, which, according to the interpreter of “Sexo, modesty and tears”, is not ideal for young people.

Undoubtedly, the speech gives a lot to talk about and analyze, especially in a society that, for a few years, has decided to show its disagreement with various manifestations of hatred or that simply violate their most essential rights.

Previous Diego Petersen Farah: Second floor in López Mateos, a very bad idea
Next You have 7 seconds to find the word “DANGER” in the alphabet soup – Teach me about Science