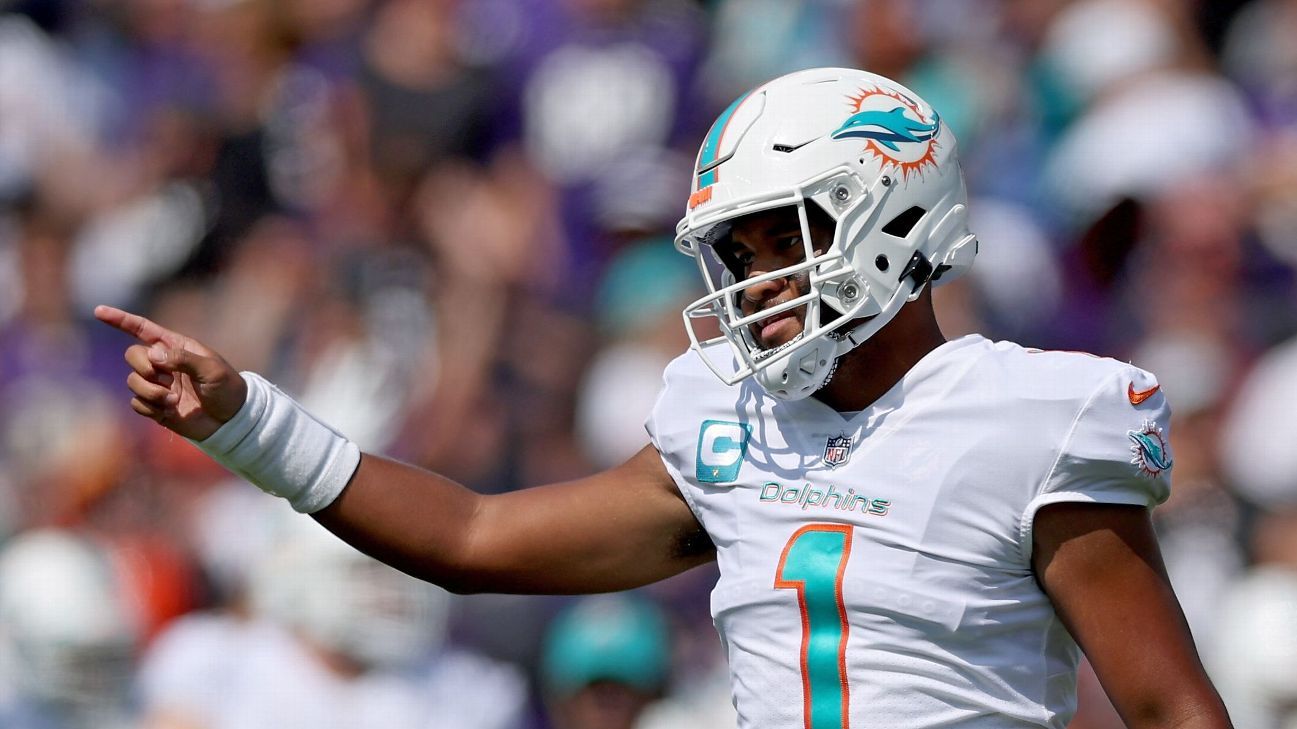 The surprises do not stop at the start of the 2022 NFL season and, in fact, they will continue for the rest of the campaign, although the quota will drop week by week as the 32 teams pick up their respective rhythms and reach (or fall to) their actual level.

For now, the New York Giants won again and, against many odds, have a 2-0 record, while, on the other side of the coin, disappointment is beginning to creep in, as is the case with the Indianapolis Colts, who are still without to know the victory after being shut out by some Jacksonville Jaguars that seem to have taken the measure well.

Week 2 offered several comebacks, some came to fruition, such as those achieved by the New York Jets and the Miami Dolphins, both on the road, while others remained in attempts.

Here’s a look at five highlights from another wild day in the NFL.

This offense promised explosiveness and Tua Tagovailoa fulfilled what was promised by giving the best game of his short NFL career and not only that, doing it on the road and at the home of some Baltimore Ravens who, historically, have a historically competent defense.

Tua broke through with six touchdown passes and 469 yards through the air after completing 36 of 50 passes; He also had two interceptions, which can be normal when you make that many passes, but the quarterback made up for his mistakes with a brilliant performance that catapulted the Dolphins to come back from being down 21 points three times, the last one early in the fourth quarter. .

Tagovailoa relied on his two most explosive weapons, Tyreek Hill (11 rec., 190 yards, 2 TDs) and Jaylen Waddle (11 rec., 171 yards, 2 TDs) to make what many imagined this offense a reality. Hill and Waddle became just the fourth receiving pairing in NFL history to have 150 or more receiving yards and two receiving touchdowns.

Accomplishing all of the above in Baltimore undoubtedly raises expectations about what the Dolphins can do this season, but seeing an explosive Tua won’t be the norm, even though coach Mike McDaniel and his team already know what his offense is. capable when tuned.

It should be remembered that the defense allowed 31 points and two touchdowns on plays of more than 75 yards and in Week 3 they will face the Buffalo Bills offense, so caution will be the Dolphins’ best friend.

Cooper Rush did an efficient job in his first game as a substitute for Dallas Cowboys heart and soul Dak Prescott, but once the Cincinnati Bengals had material to fit his style and playing tendencies, the Texan offense could only add two field goals, each at the end of each half.

The most valuable lesson from Dallas’ victory is that even though the Bengals’ offensive line has serious protection issues, the defense can carry the Cowboys during Prescott’s injury absence, particularly with a Micah Parsons relentless. The second-year linebacker was a nightmare for Joe Burrow, adding two sacks and being the protagonist of the constant pressure that the Cincinnati quarterback suffered.

An injury is the last reason any player wants to take the field, but reality is cold and after Trey Lance’s broken ankle in the game against the Seattle Seahawks, it will be Jimmy Garoppolo who will help the San Francisco 49ers to meet expectations in 2022.

It was obvious the Seahawks weren’t ready to see Garoppolo on the field, which showed when the 49ers’ No. 10 led their offense to 17 points in the first half to put San Francisco up 20-0 ( Lance set up the first field goal), but once they adjusted, the Gambusinos offense lost pace and could only score late in the game on Jimmy G’s 1-yard run.

It sounds cold, but the reality seems to be that the 49ers are more of a contender for the NFC title with Garoppolo at the helm of their offense than they are with Lance.

The Tampa Bay Buccaneers and Tom Brady shook off the New Orleans Saints’ regular-season dominance, but this victory stemmed more from home team errors than the Bucs’ merits.

At various points in the game, the Saints’ offensive line won the battle at the line of scrimmage by opening up holes for solid gains in the running game and on the other side of the ball, the pressure on Brady was constant until the fight came and Bucs wide receiver Mike Evans and Saints cornerback Marshawn Lattimore were ejected, and New Orleans lost its compass and began shooting himself in the foot.

In what was a solid defensive and physically demanding game, the Saints blew the chance to beat the Buccaneers again with five turnovers in their last six offensive drives, all in the second half, including an interception returned to Jameis Winston. for touchdowns.

Winston had three interceptions in total and the Buccaneers scored 17 points off the Saints’ takeaways.

Russell Wilson is far from the quarterback the Denver Broncos expect.

It is a reality that the Houston Texans are not the weak team that they were in 2021, but, on paper, this meeting seemed comfortable for Wilson and the Broncos, in their presentation at home, to begin to find their rhythm and level after their surprise loss in Week 1.

It wasn’t like that, and despite the fact that Denver’s offense lost receiver Jerry Jeudy to an injury, Wilson doesn’t seem to feel comfortable in the pocket; he looks eager and ready to run at any moment, which affects his shooting mechanics by not being well planted when doing so. In fact, the quarterback completed half of his passes and before throwing the one that put Denver on track with 12:37 to play, at different times in the game he had completed 3 of 11, 6 of 20 and 10 of 24 before that happens.

Wilson needs to trust his offensive line and he needs to give his passer reasons to trust it and fast.