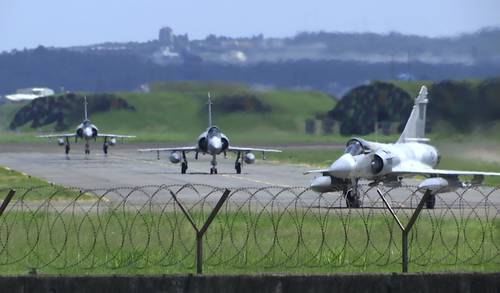 China suspends cooperation with the US and sanctions Nancy Pelosi

▲ Fighter Planes Mirage of the Taiwanese air force yesterday carried out aeronautical exercises at a base in Hsinchu. China summoned European diplomats to express its rejection of criticism of its military maneuvers in the Strait of Formosa.Photo App

Beijing. China announced yesterday the paralysis or suspension of cooperation with the United States in several key areas, including contacts in the military, judicial, anti-narcotics and ecological fields, in addition to the imposition of sanctions against the president of the House of Representatives, Nancy Pelosi, and her relatives. The package is in response to the US official’s visit to Taiwan.

He also accused Pelosi of having seriously interfered in China’s internal affairs and undermined its sovereignty and territorial integrityand announced sanctions against her and her immediate familywithout giving further details.

In addition, cooperation on the return of undocumented migrants, criminal investigations, transnational crime and drug trafficking involving their nationals will be postponed indefinitely, the ministry said.

The mobilization of aircraft and warships, the largest military drill in China’s history near Taiwan, continued yesterday as a necessary answer to Pelosi’s visit. Beijing said that more than 100 war vehicles have participated in its military exercises with live fire in the Strait around Taiwan in the last two days.

According to Taiwan, 68 combat aircraft and 13 Chinese warships crossed the so-called yesterday middle line of the strait that separates the island from mainland China. This term refers to an unofficial but generally accepted coordinate equidistant from the coasts of both territories.

We did not expect that the evil nearby neighbor would show his might on our doorsteps and arbitrarily endanger the world’s busiest shipping lanes with his military exercises.Taiwanese Prime Minister Su Tseng-chang told reporters yesterday. The White House, for its part, considered irresponsible that Beijing has decided to stop cooperation in several areas, condemned the military exercises and summoned the Chinese ambassador to Washington, Qin Gang. Wang Yi responded by accusing the United States of having the habit of creating a problem and then using it to achieve your ends. This approach will not work with Chinahe warned.

From Japan, at the end of her tour of Asia, Pelosi assured that China will not isolate Taiwan by preventing US officials from traveling to the island and ruled out that her visit has harmed the political situation in the region.

The Chinese authorities summoned the Japanese ambassador to the country, Terry Hideo, in protest at the comments made by the Group of Seven (G-7) ministers on the situation in Taiwan.

Meanwhile, Beijing is ready to deepen strategic cooperation with Moscow in the context of rising tensions across the Taiwan Strait, Foreign Minister Wang Yi said.

Taiwan’s Ministry of Defense reported multiple Chinese planes and ships in the Taiwan Strait and that they would be simulating an attack on their main island.

The Taipei Forces they detected multiple batches of communist planes and ships around the Taiwan Strait, some of which crossed the median line. They were considered to be conducting a mock attack on the main island of TaiwanThe Defense Ministry said in a statement.