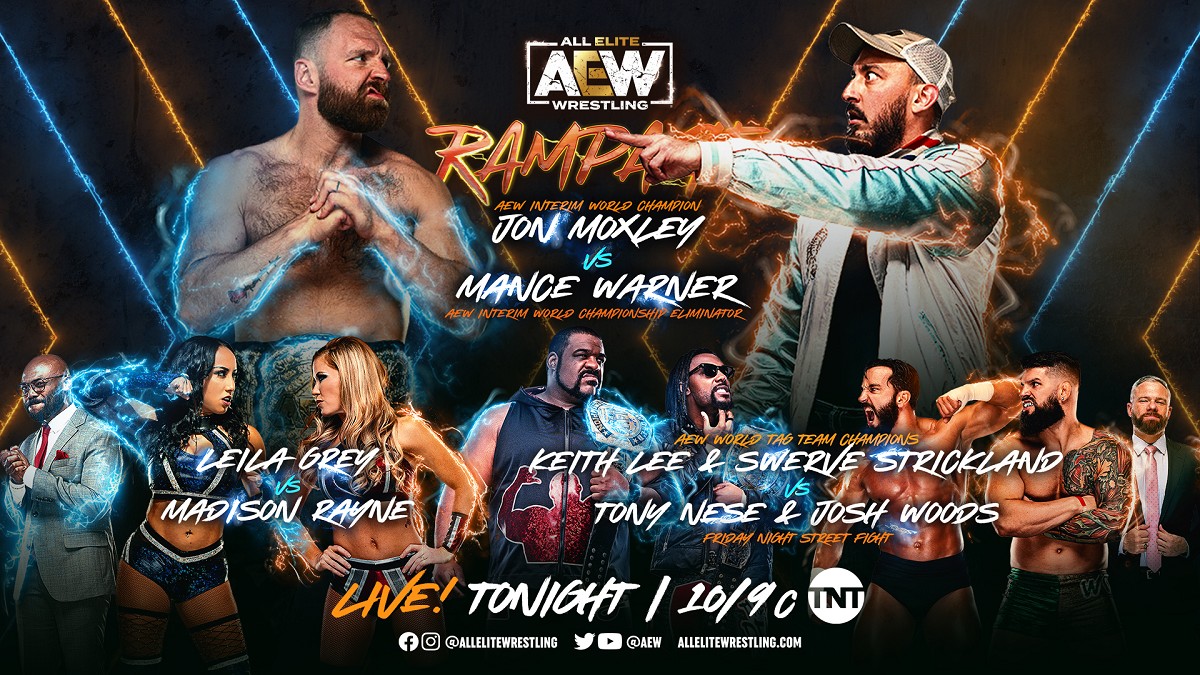 Welcome to the 53rd episode of AEW Rampage, broadcast by TNT and YouTube through the Space TV channel. On this week’s show, madison rayne will make his AEW in-ring debut against Leila Gray. Also, mance warner will face jon moxley for an opportunity for the AEW Interim World Championship.

Moxley intercepts his rival while he was making his entrance. Warner counterattacks the interim AEW Champion, sends him against the protection of the ring. The action continues outside the ring, Moxley applies a suplex on a chair to his rival. Warner recovers and applies a Larial to Moxley. The action returns to the ring, both fighters exchange blows, Moxley corners his rival and punishes his limbs. The champion applies a key to Warner’s leg, who quickly manages to escape. Warner gets the upper hand and knocks Mox down. The action returns to ringside, Warner sends against the metallic steps and against Moxley’s protection, later he applies a Suplex on a chair. Moxley recovers and hits his rival, however Wagner manages to apply a DDT on the metal stairs to Moxley. The action returns to the ring, Wagner applies a Figure 4 to the champion, Moxley manages to get out but Wagner continues the punishment on his rival’s leg. The champion tries to fight back but Wagner applies a Spinebuster to him, Mance goes in search of a chair but Moxley intercepts him with a right hand hitting the metal object on Wagner’s face. Moxley launches with a Suicide Stop on his rival, Wagner has blood on his face. The champion elbows Wagner’s chest, both are knocked down at the same time. Moxley recovers and applies a Piledriver to his rival, The fight ends with a Moxley Sleeper Hold on Warner, the referee decrees that Warner cannot continue. Winner: Jon Moxley.

Ricky Starks is interviewed behind the scenes, QT Marshall enters the scene and offers him protection due to recent Powerhouse Hobbs attacks, however Starks refuses.

Both fighters quickly start the match. Takeshita gets the upper hand and lands some punches on the corner, Konosuke tries to continue the attack but Avalon distracts him from ringside. Nemeth gets the advantage and lands some knees, however, Konosuke recovers and applies a Blue Thunder Bomb, after which he lands a knee to the opponent’s head to take the victory. Winner: Konosuke Takeshita.

After the fight, Peter Avalon attacks Konosuke from behind, however, Konosuke recovers and lands a Knee on Avalon.

In a behind-the-scenes segment, Orange Cassidy is shown accompanied by Best Friends. The group announces that they will go for the Trios Championships, they all put their hands together and out of nowhere Danhausen’s hand appears next to them.

Both fighters struggle at the beginning of the fight. Gray and Rauyne search for the count of three without success, after which they exchange keys. Gray punishes his rival in the corner and sends Rayne to the outskirts of the ring. The action returns to the ring, Rayne gets the advantage and applies a Northern Lights Suplex but without success on the count of three. Laeila manages to recover and knocks down her rival, Madison rejoins and they both exchange blows. Madison prevails over her rival and applies a Cross Rayne to take the victory. Winner: Madison Rayne.

After the fight, the TBS champion, Jade Cargill enters to scene. Jade tells him that she has an open challenge on Quake at the Lake and that he would love for Rayne to be his opponent. Kiera Hogan enters the scene to attack Madison from behind, however, Rayne counterattacks with a Cross Rayne before Jade’s gaze.

The action begins at ringsideWoods and Swreve attack each other, Keith Lee arrives to punish both rivals. Lee knocks Woods down with a few machete blows, Tony tries to launch himself at Swerve but crashes into the chairs. Swerve and Lee try to attack Woods but Nese arrives and throws flour in the eyes of his rivals. Swerve finds a toolbox and throws it at Nese but Tony corners it at the last second. Tony grabs the box and lunges at Keth Lee, on the other hand, Woods and Swerve attack each other, Josh prevails and continues the attack on Lee. The villains throw trash cans into the ring to punish their rivals. Tony sends Swerve against one of the boats located in a corner, Woods continues the attack but Swerve recovers and corners Tony. Woods hits Lee with a boat lid, Josh and Tony take Swerve to the edge of the ring to try to throw him into some tables, but Keith stops him and Swerve hits both rivals. The action returns to the ring, Keith Lee knocks down both rivals but Mark Sterling hits him with a chair. Tony and Josh take advantage of the distraction and hit Lee with a chair. Tony sets up a table to punish Swerve but Swerve manages to fight back, however Sterling attacks him from behind with a French lock, Woods and Tony settle Tony on the ring table but Keith Lee springs into action and knocks them both down. Seeing this, Mark Sterling climbs on the corner to try to hit Swerve, however, Keith Lee knocks him down against the table. Woods rejoins and attacks Lee, sending him to the edge of the ring where he tries to apply a German Suplex, finally managing to apply it with the help of a Superkick from Tony, but Lee falls on Josh. In the ring, Swerve rejoins and exchanges blows with Nese, Swerve prevails and sends Tony against the chairs, Swerve achieves victory after applying a Swerve Stomp on Nese. Winners: Swerve In Our Glory.

Previous Firefighter attends fire and it is discovered that relatives died; 3 children and 7 adults died | News from Mexico
Next LoL – Riot reveals the Udyr rework: This is how the champion will change after his big update