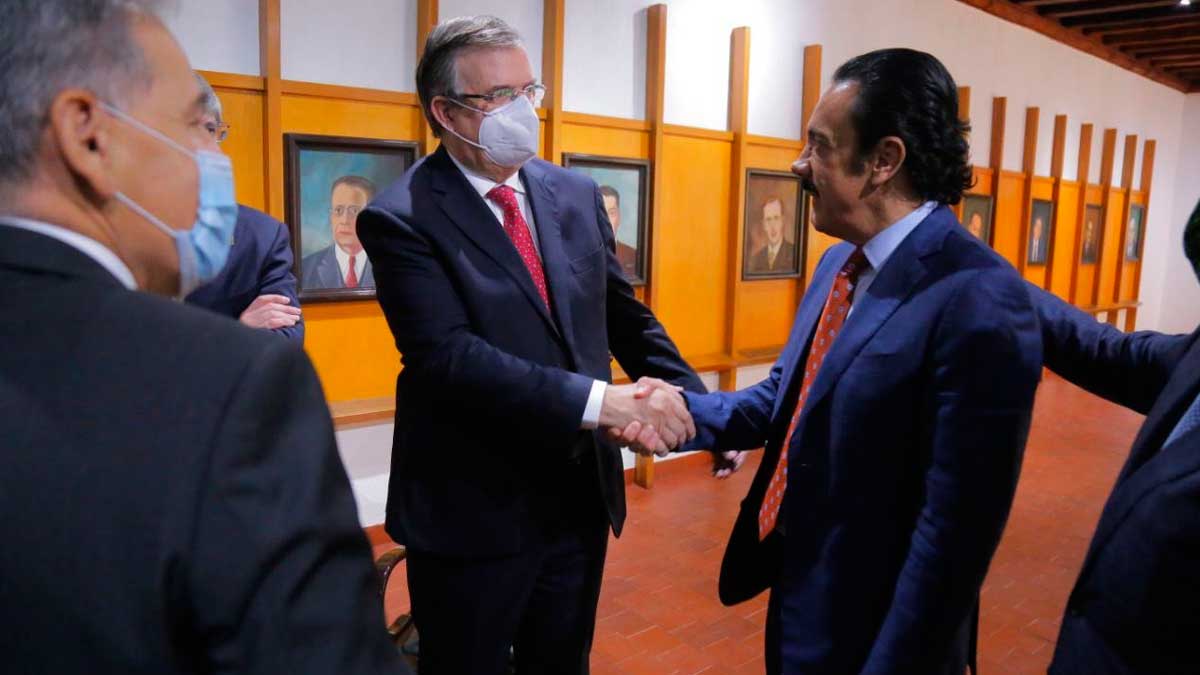 Before more than 200 artists, academics, researchers, scientists and diplomats, he appeared in the central courtyard of the Mining Palace the book “The Table of Elements”, a work in which the efforts of the National Autonomous University of Mexico converge (UNAM), the Ministry of Foreign Affairs and the Government of Hidalgo.

During his speech, the Foreign Minister Marcelo Ebrard Casaubón recognized the role of the UNAM in the national scientific panorama. In addition, he highlighted the work of the Governor Omar Fayad: “I must say that it is very rare for a governor to care so much about science. It is to be recognized and highlighted that the government of Hidalgo, Omar in particular, has been a major promoter of this type of activity and hopefully many other states will do so, and we will all do so, to strengthen scientific, technological and artistic activities and the humanities of Mexico“, said

Ebrard spoke of the great relationship with many scientific centersitem considered of high priority in everything that participates or where Mexico heads; it is a priority in all areas, with a broad capacity for cooperation.

“A foreign policy, without a scientific and cultural dimension, is difficult to imagine because there would be no good results, we would not occupy the space that corresponds to Mexico.”

The rector of UNAM, Enrique Graue Wiechersagreed with the chancellor that “Hidalgo has a governor with such interest, because science does not bear immediate fruit and I have already told him publicly on more than one occasion, in truth, in Governor Omar Fayad, he found the University (UNAM) a great ally for the undertaking of high breath project.”

Graue Wiechers said that this text is a tribute and a determining starting point of what the periodic table of elements was, in order to understand and explore its origin, as well as the universe in which we live.

“Knowledge is global and we cannot deny it; it is possible to create in Mexico a new patrimony of knowledge at the level of the world powers, let us unite through scientific diplomacy.”

Big and powerful ideas have ups and downs, he revealed, but together we will continue in this task of achieving a synchrotron to Mexicoan act of coherence and justice with the researchers Y scientists trained during the last four decades, who today do not have the cutting-edge tools to exploit their talent and potential.

“A purpose also of the chancellor Marcelo Ebrard Casaubón, who, from the Ministry of Foreign Affairs with his great team, speaks and discusses these projects, in all parts of the world,” he said. fayad.

“With this high vision, the Foreign Minister decided to join Mexico in the Artemis Program, a global agreement so that once again men, and now also women, step on the Moon, this is the vanguard and the frontier of knowledge established in the world and there we all go”, he pointed out.

Mexico, added the state Executive, has the capacity to cooperate and do so as a main part of its national project. “Today we seal an alliance with Foreign Minister Marcelo Ebrard, with whom I share a progressive vision of science diplomacy for development”.

“Doubt and fear are not an option. The way is to study the future to influence it; this leads us to innovate, to serve to forge the heritage of society and future generations.”

The book “The Table of Elements” is a unique editorial piece coordinated by María Luisa Passarge, José Franco and Rogelio Cuéllar; a work so powerful that it transcends art, science and politics. A portrait of the universe of the elements through the minds and hands of great and recognized artists of Mexico and the world.

“I acknowledge the shared effort of La Cabra Ediciones, the Ministry of Foreign Affairs, the National Autonomous University of Mexico, the Government of Hidalgo and the Art, Science and Technology Council”, he exposed.

This beautiful work, he added, has a deep meaning, it is an interpretation from art, of the periodic table of the elements, an embassy of the culture on the science, one of the greatest human innovations.

The governor fayad He assured that only with the impulse to the development of new knowledge in the institutions, the next great feats of human ingenuity will be carried out.

“We are a country of women and men with the talent to discover, engineer, confront and resolve. Today we are closer to the university of Mexicans, we share causes and specific purposes through projects such as the Biotechnological Business Accelerator, to promote the prestige of Mexico in the development of vaccines and medicines.”

Large projects are long-term, require passion and should not be subject to political temporalities. Today, the greatest contributions to the world are achieved with international cooperation and solidarity that characterize the highest scientific diplomacy, he concluded.

The prologue is authored by the governor omar fayad; the presentation ‘Communion between science and art’, text by Foreign Minister Marcelo Ebrard Casaubon; ‘Simple, elegant and powerful: The Periodic Table’: José Franco, Lamán Carranza and Carlos Chimal. The text ‘Why the table lasts’, Roald Hoffman, Nobel Prize in Chemistry 1981 and the Epilogue ‘The Table of the elements’ by Rogelio Cuéllar and María Luisa Passarge.

The periodic table of the chemical elements it is one of the scientific achievements that synthesize an arrangement accumulated throughout the history of humanity, on the composition of matter in the universe; combines art and science while allowing to claim a little known passage of Mexican scientific heritage.