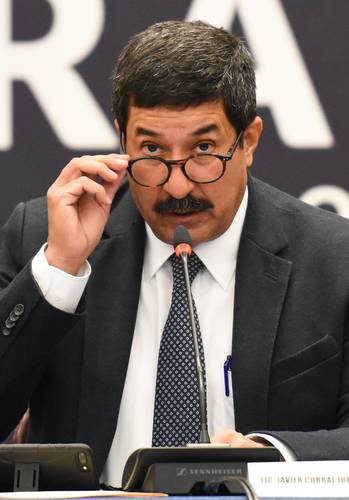 They approve a political trial against Javier Corral Jurado for contempt

Chihuahua, Chih., The Jurisdictional Commission of the local Congress, with a majority from the National Action Party (PAN), decided to initiate a process of impeachment against former PAN governor Javier Corral Jurado, following a complaint filed by lawyer Gerardo Cortinas Murra for contempt of the state austerity decree issued in 2017, which forced him to reduce his salary and prohibited him from traveling by first-class plane or on aircraft in the state government fleet.

Javier Corral see moros with tranchetes everywhereMario Vázquez Robles, leader of the local PAN deputies, responded to statements by the former Chihuahuan Executive, who assured that he is innocent and suffers political persecution from his successor, María Eugenia Campos Galván, also from the PAN.

State legislators Gabriel García Cantú, José Alfredo Chávez Madrid and Yesenia Guadalupe Reyes Calzadillas, from the blue and white, In addition to the PRI member Omar Bazán Flores and Óscar Avitia Arellanes, from Morena, they approved opening the process against Corral Jurado and processed the file CJ/JP/001/2021, related to an impeachment complaint filed on May 31.

The Jurisdictional Commission will review evidence and hear arguments about Javier Corral’s alleged violation of the Decree on Austerity Measures and Rationality of Public Expenditure, which forced him to sell the air fleet owned by the state government, as well as to eliminate maintenance expenses, insurance , operation and certification of aircraft.

The decree, published in the Official State Newspaper in January 2017, it included another 32 savings measures, most of which were not fulfilled. Even Corral continued to use the ships acquired by his predecessor, PRI member César Duarte Jáquez, on dozens of personal and official trips, arguing that they were not sold for do not waste them.

▲ The former PAN governor of Chihuahua Javier Corral Jurado (2016-2021), during a meeting in the Senate of the Republic, in October 2020.Darkroom Photo

The deputies set a 30-day deadline for the Chihuahuan Ministry of Finance to provide evidence such as payroll receipts for the former PAN governor and his officials –with which they seek to verify that they did not comply with the salary reduction–, documents on the use of the flotilla state administration airline and first class airline ticket payments.

You must respond within 10 days

The president of the commission, Gabriel García, reported that this body will inform Corral about the complaint and will inform him of his defense guarantee, his duty to answer in writing and his right to offer evidence in his favor within 10 days after the notification.

If the former governor does not respond in writing within the stipulated term, the facts attributed in the complaint will be considered true and Corral will lose his right to present evidence, according to the Law of Political Judgment and Declaration of Provenance for the State.

García Cantú stressed that the Jurisdictional Commission carries out responsible work and recalled that any citizen can file complaints or complaints against officials who incur in acts or omissions that are detrimental to public interests.

To date there are 11 complaints against Corral. On his Twitter account, the former president said that the Jurisdictional Commission of the local Congress interprets the Law of Impeachment and Declaration of Provenance retroactively, with no greater hold than rancor, have no doubt that in this battle we will be together and stronger.