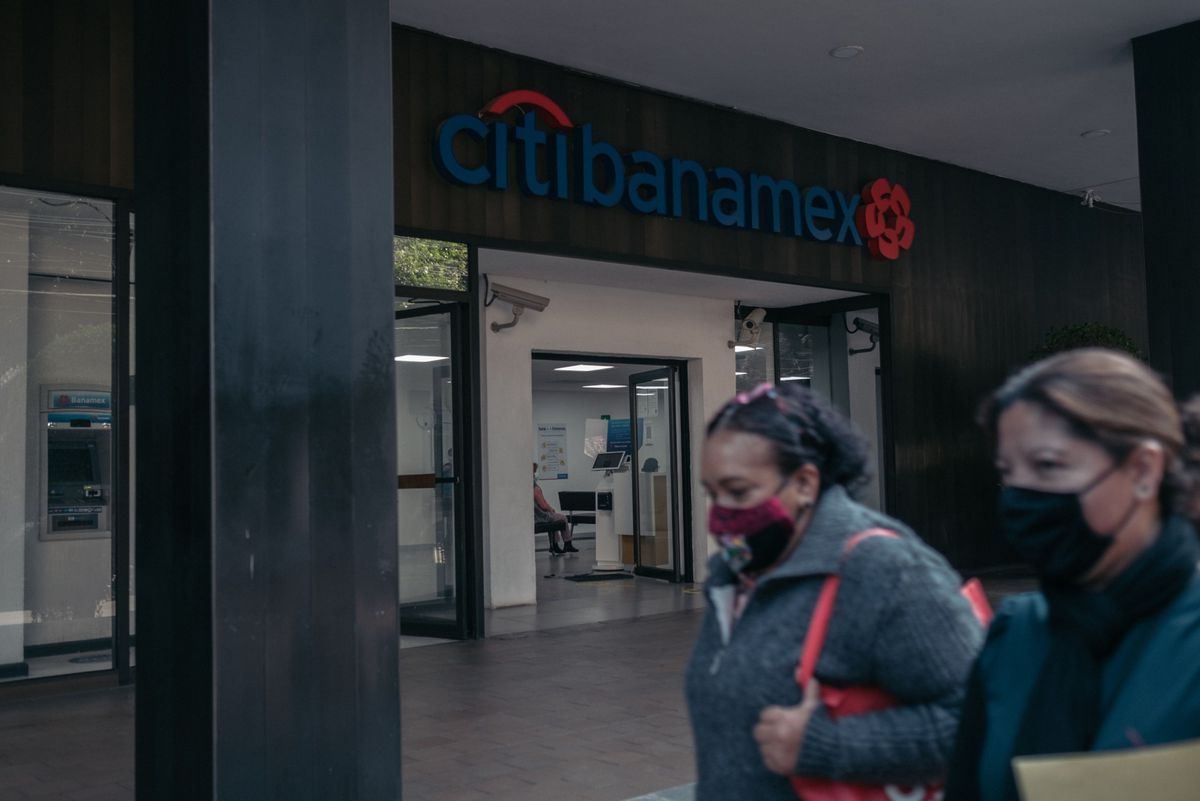 Citigroup is looking for a millionaire interested in buying the more than 1,200 branches of Banamex. After eight months of announcing the sale of the Mexican subsidiary, the list of bidders to acquire the third largest bank in terms of assets in the country has been shortening. Spain’s Santander bank and Mexico’s Grupo Salinas have dropped out of the race, while some of the country’s biggest fortunes are still in the running. This is the case of Carlos Slim, with Inbursa or Carlos Hank, at the head of Banorte, the two bidders whom financial sector analysts identify as the strongest, although they do not rule out other players such as Germán Larrea –owner of Grupo México– or the Baillères family, heir to the GNP financial and insurance businesses.

According to information revealed this Monday by Bloomberg, as the number of bidders is reduced, Banamex – the third largest institution by number of assets in the country until 2021, only behind BBVA Mexico and Santander – can attract offers of between 7,000 and 8,000 million dollars. EL PAÍS sought out Banorte to find out its position on the process, however, the institution replied that “they had no comments” while Banca Mifel, currently chaired by Daniel Becker, did not respond to the request for information made by this newspaper.

Banorte was one of the first to raise its hand in the purchase process. Currently, the institution is chaired by Carlos Hank González, who is a member of the López Obrador Business Advisory Council. As a gesture of sympathy, the president himself has recalled that the grandfather of the current director, Roberto González Barrera, helped him open an account to receive contributions for his political movement. “Roberto was a real friend,” he said in 2019 during a forum.

Due to synergies, Banorte, with its consumer banking portfolio, has a profile more similar to that of Banamex. Originally a minor institution focused on the northern region, the bank embarked on an ambitious acquisition strategy during the 1990s and early 2000s and is now the fourth largest institution in the country by assets – 1.2 trillion pesos, a 11% of the total, in May of last year, according to the National Banking and Securities Commission.

Unlike Banorte, Inbursa, owned by tycoon Carlos Slim, whose fortune this year exceeded 81,000 million dollars, according to the list of Forbes, is more focused on corporate and private banking and has opted for a calmer growth strategy. In his case, he can also boast of having the approval of the president of Mexico, Andrés Manuel López Obrador, who has repeatedly noted his harmony with the president of Grupo Carso by describing him as one of the “most austere” businessmen ”. Regarding the Banamex purchase process, Inbursa recently confirmed his interest: “We believe there are good assets. It would be good if we could get the financing and we have to see if it is at a good price and works for our strategy”, declared the director of Investor Relations, Frank Aguado.

Slim is not the only billionaire interested in Banamex. Recently, it has emerged that the owner of the most important copper mining companies in Mexico, Germán Larrea, whose fortune exceeds 26,000 million dollars, according to the Index of bloomerg, has engaged the services of a team of experienced Mexican financial professionals to assist with its offering.

Jorge Sánchez Tello, director of Applied Research of the Foundation for Financial Studies, Fundef, assures that the purchase of Banamex is one of the most difficult points after the departure of Banco Azteca and Santander from the contest. “Mexico’s main businessmen, whether they are directly or indirectly in the financial system, are interested because being a banker in Mexico continues to be a very good business,” he says.

“There are very strong competitors, Banorte is a fairly large group with a lot of influence and economic power. The other great economic power, especially because of who heads it, is Inbursa, which belongs to the Slim family. The other group of investors, although it is smaller, but also interesting, is Banca Mifel, which is bringing together a group of investors to see if they reach the price. Grupo México is also interested, and although they have not participated as such in banks, Grupo México has a lot of economic power and there is also talk of other Mexican business groups such as Grupo Val”, he specifies.

The director of this research center details that the transaction has been delayed because it involves the analysis of many variables by both parties, however, he trusts that it will be an excellent opportunity for whoever is the winner. “In Mexico it is a good business to have a bank, it will continue to be, regardless of the government and the macroeconomic variables. We have a very solid banking system. Whoever buys it must have a minimum vision of 10 to 30 years, ”he settles.

Benjamín Álvarez, stock market analyst at CIBanco, points out that it will be a complex transaction because the assets and the brand are involved, prestige, a more complicated matter to value. From his perspective, Banorte is one of the best positioned contenders because of his experience. However, he does not rule out a surprise by Grupo Inbursa, and even the formation of a consortium of shareholders that could group together and take the bank to the stock market.

Heading for the second phase of the purchase process and after the departure of HSBC —which since February denied having an interest— and Santander, analysts agree that Mexican capital is the one shaping up for control of Banamex, leaving behind the option of some foreign buyer. The balance is tilting towards Mexican capital, one of the requests made by the López Obrador National Palace as soon as he learned that the bank had been put up for sale. Now, he too has asked the new owner not to fire the workers. “We can turn it into something very good if, without authoritarian measures, we manage to Mexicanize this bank, which was owned by Mexicans since the 19th century,” he declared.

For analysts, the departure of Santander has not been a surprise. The Spanish bank already has a significant presence in the country, a market share of 14%. At the end of July, the institution indicated that the purchase offer presented was rejected by Citigroup, but the reasons were not specified. Some sources mentioned that the offer was well below what the US firm was asking for. In addition, despite the good harmony between López Obrador and the president of the bank, Ana Botín, the Executive’s insistence that the new owner be Mexican limited the purchase options.

Economist Carlos Ramírez affirms that the president does not have the power to veto a purchase of this type for nationalist reasons, but that this type of message discourages the participation of foreign entities. “Nobody is going to get into that race with the president against it,” he says. On the other hand, Ramírez never saw much interest in Santander, which is immersed in a change of direction. “From the beginning the interest felt forced. It seemed like a strategy to not be left out of the initial photo, ”he says.

Even with an attractive offer on the table, the purchase must receive the approval of the Federal Economic Competition Commission (Cofece). Inbursa, with 3.5% of the market by assets, would not present a major problem. Banorte’s case is more complex. The institution has the largest Afore, a retirement savings fund, in the country. Added to the Banamex Afore, they would reach 37% of the market, which would far exceed the limit allowed by law, 20%.

Despite these limits, Cofece can authorize a higher limit or impose conditions such as the sale of part of the business. Former Competition Commissioner Miguel Flores believes that neither Inbursa nor Banorte would face major problems in obtaining an authorization. “Because of its participation, the existence of BBVA and other relevant players, it has more possibilities of being a concentration that is approved and that the conditions are lower. Probably, it is not even necessary to impose conditions, ”he concludes.

In eight months since the sale announcement, Citigroup has declined to give figures and details about the process, just a few sentences has been uttered in its most recent financial report for the first half of the year. “We are pleased with the interest in our Mexican franchise based on discussions with buyers,” said Jane Fraser, CEO of Citigroup, in mid-July.

In the race for more than a thousand branches and 20 million clients in Mexico, the financial headquarters of the most powerful men in Mexico continue to do the math, while the US firm analyzes with a surgical pulse each of the proposals it has on the board . In the end, everything will depend on who bids the most and convinces Citigroup.

Previous “Leave at the first cry!” Miss Hidalgo denounces physical and verbal violence from her ex-partner
Next VIDEO. They capture brutal punishment of blows against a puppy in the Canvas Charro de La Villa