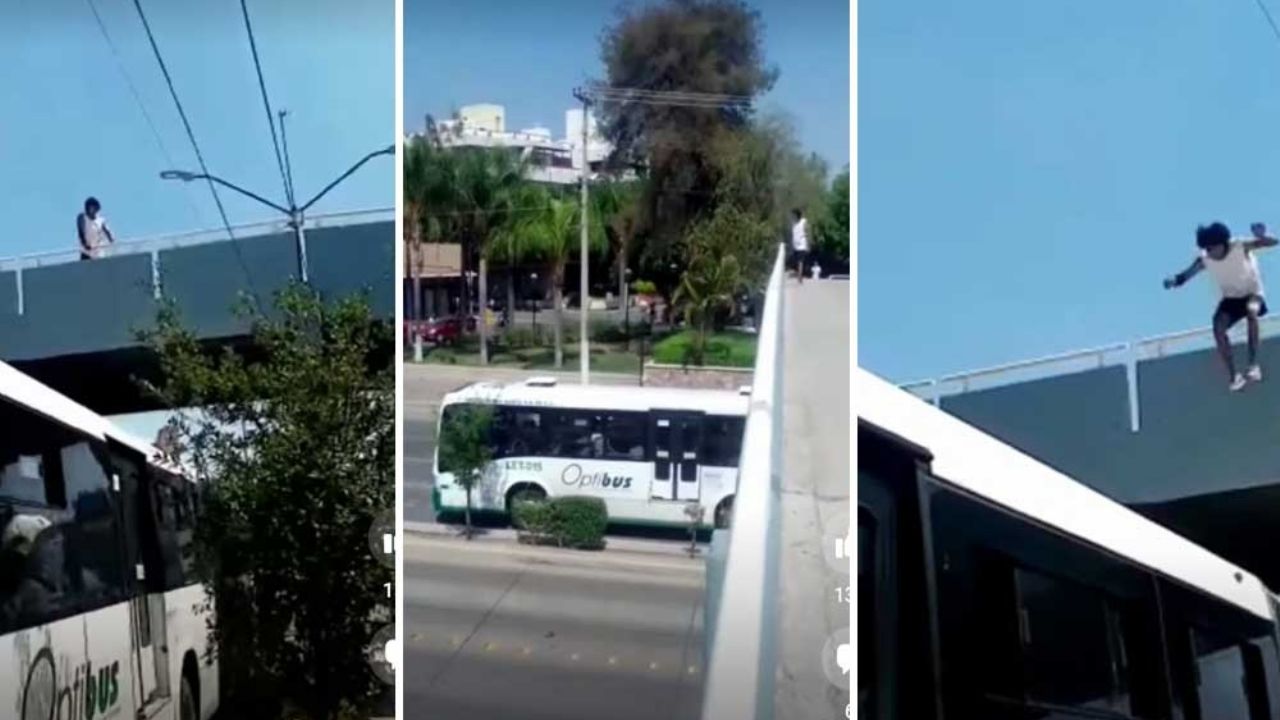 León: Noah jumps to the roof of moving caterpillars from the Hidalgo Park bridge, alert for extreme parkour game

Leon, Guanajuato.- The president of the Coordinated Carriers, Daniel Villaseñor alerted the public about an extreme game that is beginning to go viral in the city and consists of jump from bridges to the roofs of caterpillars.

“It is blunt, it is prohibited and it puts your life at risk and then the others, if you fall into the joint of the caterpillar, the canvas is not very strong and could break, apart from being trapped when turning it could be pressed, it is Of course, don’t do these crazy things,” he insisted to AM.

From the hidalgo park bridge that crosses the Adolfo Lopez Mateos Boulevard, Noah (presumed responsible), jumped into the roof of route 5 of the Integrated Transportation System while detained as part of the extreme parkour challenge.

“We are going to see Noah’s death”, is heard in the video seconds before the young man jumps the bridge, falls on the roof of the “caterpillar” while waiting for the stop and finally reaches the pavement, in two agile jumps.

The dangerous moment was recorded and it arises after the practice became popular in Mexico City, where young people jump into subway cars.

Parkour is a sport of French origin characterized by overcoming obstacles present in a race, so if you run into a truck going over a bridge, you jump over it.

For his part, Daniel Villaseñor insisted that this joke affected transport users at that time and the driver.

“The operator at the time reported the blow to the roof of the bus, looked in the mirrors and said that he saw someone fall. He understood that it was a joke because other young people nearby run away laughing and he froze. It is something unprecedented and we are surprised at the barbarities that are commented to get likes, ”he said.

Daniel Villaseñor insisted that action be taken on the matter, but he invited citizens to see a similar situation, report it and try to stop it.

“We should not normalize, I am focusing on the conscience of the people and logic, which is a high-risk action and it is a matter that someone who does it has some degree of madness or a degree of stupidity, “he concluded.

AM searched for the young filmmaker, but so far there has been no response.

Previous Chicharito and the controversial gesture he made to the Mexican flag in a Galaxy game
Next Niurka advises Cynthia Klitbo to change her ‘preferences’; the actress was not silent