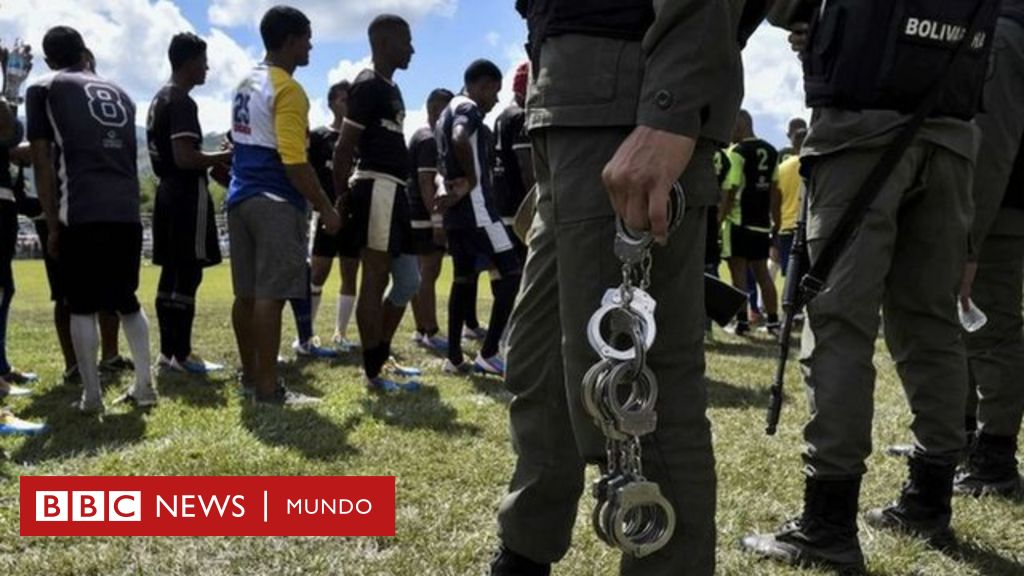 How the feared Tren de Aragua operates, the bloody Venezuelan megaband that has spread throughout Latin America

After the eviction on June 16 of 23 houses in Cerro Chuño, a poor sector of Arica, in the extreme north of Chile, the police found weapons, drugs and the buried body with signs of torture of a man who was already wearing a Dead month, according to autopsy.

The agents arrested 17 people who were charged with crimes of trafficking and illicit association for drug trafficking, kidnapping, possession of firearms, among other charges.

In some Latin American countries, this type of operation has become common in recent decades, but in Chile, one of the safest countries on the continent, cause commotion.

“I want them to know that we are going to persecute them,” the country’s president, Gabriel Boric, warned days later, referring to the case.

According to the police, the defendants are part of the group “Galician”, an arm of a Venezuelan criminal mega-gang that has spread across almost the entire continent.

The Aragua Trainas he is known, was born in the state of the same name, in northern Venezuela, about a decade ago.

According to experts, this feared organization is led by Héctor Rusthenford Guerrero Flores, alias “Niño Guerrero”, who is currently imprisoned in the Tocorón prison for various crimes, including homicide.

There is consensus among experts that Tocorón functions as the “headquarters” of the Aragua Train.

The Ministry of Popular Power for the Venezuelan Penitentiary Service did not respond to BBC Mundo’s request for comment.

According to Luis Izquiel, professor of Criminology at the Central University of Venezuela, the gang was born “about 12 or 14 years ago” in a union that controlled a section of the train that would cross the state of Aragua.

“Union members extorted contractors, sold jobs on construction sites and became known as ‘those of the Aragua train‘” assures the organized crime expert in an interview with BBC Mundo.

“Some of these individuals ended up imprisoned in a local prison known as the Tocorón prison and from there they began to gain strength as a criminal organization,” he continues.

Izquiel explains that, from prison, Héctor Rusthenford Guerrero began to bring together former union members and to other common prisoners and gradually put together the organization that we know today.

First, they spread outside the prison to other sectors of the state of Aragua.

“Today they control the neighborhood of San Vicente in the state of Aragua, which has become their control epicenter outside the Tocorón prison,” he adds.

Then they spread to the rest of the country: “It is known that they are in Sucre state, controlling drug trafficking routes, and they participate in illegal mining in Bolívar state.”

According to organized crime expert Ronna Risquez, who is currently writing a book about the Tren de Aragua, the first time the Tren de Aragua was heard of as an already established criminal gang was in 2013, months after the escape from the Tocorón prison of the “Niño Guerrero”, who was recaptured almost a year later.

“Before that there were several organizationssome associated with the Tocorón prison and others that operated outside the prison in Aragua state and who are linked to the railway that was under construction in that area,” the researcher tells BBC Mundo.

“That’s where the name Tren de Aragua comes from.”

Risquez assures that Guerrero Flores is the official leader, but adds that the group could have at least two more leadersand that it is suspected that one could be in a Venezuelan mining state and the other abroad.

Criminology professor Luis Izquiel explains that “Niño Guerrero” is capable of controlling the Aragua Train from prison because for several years some prisoners have “owned” control of some prisons in Venezuela through the leadership of prison gangs.

“Everything that happens inside these penitentiaries is managed by these criminals, who they have more power than the directors of the prisons or the military guarding them,” he says.

The criminal leaders in Venezuela are known as the “pranes” and Héctor Guerrero Flores is perhaps the most important in the entire country.

According to Izquiel, this occurs with the complicity of many state officials, whether by “action or omission.”

Ronna Risquez affirms that she has identified the presence of the Aragua Train in eleven states of Venezuela, but its activity currently not limited to the borders of the Caribbean country.

He points out that although the first public evidence of a foreign expansion of the group was registered in Peru in 2018, its international operations may have started earlier.

On August 3 of that year, the Peruvian Police Robbery Investigation Division arrested five members of a gang they identified as “The Damned of the Aragua Train“. They seized three firearms, a truck, a pineapple-type grenade and balaclava.

One of the detainees, the Venezuelan Edison Agustín Barrera, alias “catire”, admitted having committed six homicides in Peru under the modality of hired assassins.

Since then the band has expanded in that country. On July 19, local police arrested four Venezuelan nationals involved on the tenth floor of a building in Lima, the country’s capital.

In neighboring Brazil, the authorities have identified links between the Tren de Aragua and El Primer Comando de la Capital (PCC), the most important criminal organization in the country -and which was also born in a penitentiary- in the state of Roraima, which shares border with Venezuela.

Group activities have also been recorded in Colombia.

“In Colombia, it began operating in the border area with Venezuela, between Táchira and North Santander, where they now control the border crossing on the Colombian side. Then it expanded to other Colombian regions, including Bogotá, more recently,” says Risquez.

At the beginning of July, a video in which two subjects can be seen beating, torturing and suffocating a migrant to death served as evidence for the Bogotá police to capture aliases Alfredito y el Capi in the town of Kennedy, two alleged members of the Tren de Aragua.

According to the Colombian authorities, the criminal group has been fighting since 2021 with other Colombian gangs for control of the drug business in the Colombian capital.

“His hallmark is to cause fear”

Three weeks before the police operation in Bogotá, much further south on the continent, the chief of the Chilean police’s Anti-Narcotics and Organized Crime Prefecture, Rodrigo Fuentes, offered details of how the megaband operates in Chile.

“They obey a leader, they have people linked to the management of weapons, others who are concerned with the collection of money, known as vaccines, as extortion, and assassins,” the official told Chilean media.

“They kill according to an order, here the figure of the normal hired killer that we know does not occur, where there is a prize or a promise of remuneration. Here there is an order of a leader who orders to kill a person that does not pay for the vaccine, when it is extorted,” he added.

According to Fuentes, much of the illicitly obtained money is sent to Venezuela.

“The organization itself has leadership that is in Venezuela and these leaderships are transformed into operational arms in different countries.”

Mario Carrera, who is regional prosecutor for Arica and Parinacota, a region near Chile’s borders with Peru and Bolivia, called it “an organization quite rude in his way of acting“.

“Normally a criminal organization seeks to act stealthily so as not to arouse greater suspicion. These people do not, their hallmark is to cause fear and for this they use the techniques that we have seen, homicides and torture,” he said last week during an intervention in the Cooperative Radio of Chile.

The Aragua Train has also been accused in Chile and other countries of trafficking in women for sexual exploitation and migrant smuggling.

Ronna Risquez explains that although its presence has been verified in countries such as Colombia and Peru, it is presumed that the Aragua Train operates in many other countries.

For his part, Luis Izquiel assures that the gang has a presence in Ecuador, sometimes controlling the border crossing with Colombia.

According to the specialized site insight crime, the Aragua Train has become a “transnational criminal threat.”

“He has followed the trajectory of the exodus of Venezuelan migrants and has found a way to establish permanent operations in several countries,” he says.

Calculate the number of participants of the Aragua Train is complicated, but Izquiel calculates that it could be between 2,500 and 3,000 individuals, while Ronna Risquez’s estimate goes up to 5,000.

Risquez considers it important to highlight that it is a group that is not dedicated to a single criminal activity, which gives it an “advantage” over other gangs.

“The Aragua Train has a great capacity to adapt. It is not a group that is dedicated exclusively to drug trafficking or smuggling or kidnapping. It is looking for niches and gaps where it can get involved and precisely one of the niches that it has taken advantage of is Venezuelan migration,” points out.

“Venezuelan migrants may have become the main victims of the Train. They extort money from them, they use them to traffic migrants or people, for trafficking and sexual exploitation.”

“They don’t have the weapons of the Mexican cartels or the knowledge of running illegal businesses that the FARC dissidents have or their experience, but they know how to move and adapt.”